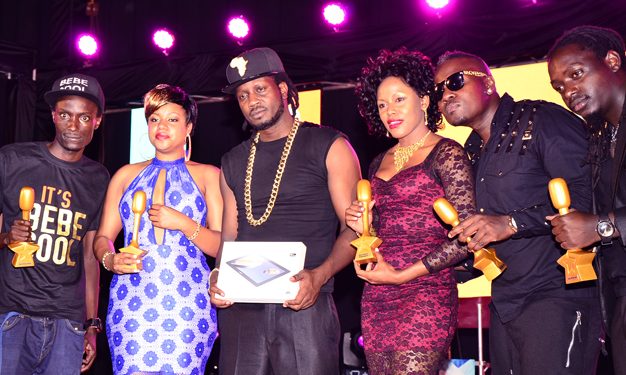 Bebe, Zuena and some of the Gagamel members with his trophies as Bebe holds a Huawei tab that came with winning the Best Male Artiste accolade.

Bebe Cool reigned supreme at the third annual Hipipo Music Awards ceremony, taking home five trophies.  Singer was named Artiste of The Year and Best Male Artiste on top of his Love You Every day video scooping the Video of The Year category among others.

Many critics have called these the Bebe Cool awards because Bebe Cool also dominated last year, taking home a whooping seven trophies. However organisers have rubbished those who cry foul to vote for their favourite artistes because these awards are 100 per cent based on fans’ votes, hence the tagline The Fans Decide.

Bebe Cool has one of the most active fans’ groups on Social Media who call themselves the Gagamel Phamily, after his Gagamel crew and they also won an accolade for Most Active Fans Group.

Radio and Weasel took home four awards while Sheeba Karungi was named Female Artiste of the Year thanks to her hits like Go Down Low, Ice Cream and Twesana.

Artiste Of The Year – Bebe Cool

Best Use Of Social Media By Artiste – Eddy Kenzo

Album Of The Year – Amaaso Ntunga By Radio And Weasel

Video Of The Year – Love You Everyday – Bebe Cool

Song Of The Year – Neera – Radio And Weasel