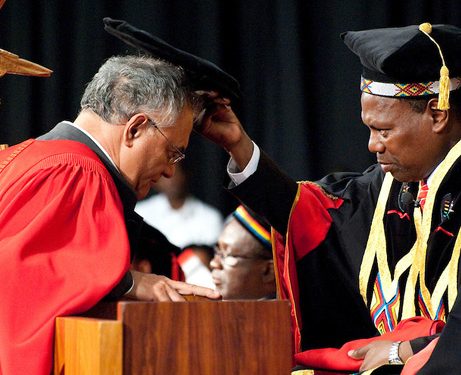 International scholars from several countries have written to Makerere asking the university to do everything in its power to ensure it doesn’t lose Professor Mahmood Mamdani because of the recent chaos he’s been involved in with his junior staff Dr. Stella Nyanzi. The scholars, 40 in total, include full professors, associate professors, doctors and administrators from various international universities. Most of them are from the US, but there are also some from the UK, India, South Africa, Senegal and Canada. Their jointly-signed document was sent to Makerere yesterday, among other things warning of the ruin that may befall the university should Prof Mahmood Mamdani be relieved of his duties as executive director of the university’s University Institute of Social Research (MISR). Indicating that they have a strong association with MISR, the international scholars explained that Mamdani’s leadership, especially in direction of MISR’s PhD programme, is something Makerere shouldn’t afford to lose at this point in time. They reckoned Prof Mandani’s expertise brings donor confidence that will be threatened if at all he is let to go, and they advised that the professor’s contract be renewed to sidestep a looming leadership void. “We write to express our concern about the future of the doctoral programme at [MISR]. None of us are at present employed by Makerere University. But many of us have had an attachment to MISR through external research… In our view it would be premature to deprive MISR of his [Prof Mandani] expert leadership at this crucial stage in the life of the PhD programme,” the scholars wrote. Also yesterday, the Makerere University Convocation comprising former students also rallied behind Prof Mamdani, demanding for action against Dr Nyanzi and Prof John Ddumba- Sentamu, the university vice chancellor. Dr Tanga Odoi, the chairperson of the convocation, accused Prof Ddumba of personalising the institute.
Tags: Mahmood MamdaniMakerere UniversityProfessor Ddumba SsentamuProfessor Mamdani
Previous Post

Chris Mubiru demoted from family leadership over his conduct

Winnie Nwagi’s curves caused her problems in the past

Winnie Nwagi's curves caused her problems in the past