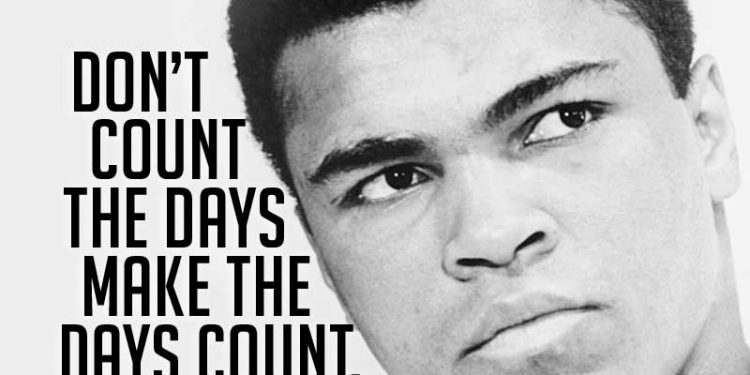 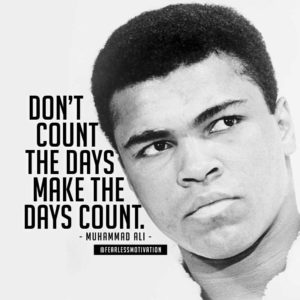 Legendary boxer Muhammad Ali, widely considered as the greatest of all time, passed on early this morning. Here we bring you some of the most colourful statements the late boxer (real names Cassius Clay) leaves behind. Announcing his conversion to Islam after the first Liston fight“Cassius Clay is a slave name. I didn’t choose it and I don’t want it. I amMuhammad Ali, a free name – it means beloved of God, and I insist people use it when people speak to me and of me.” On becoming world champion (after beating Liston) “I shook up the world, I’m the king of the world. You must listen to me. I am the greatest! I can’t be beat!” On training “I hated every minute of training, but I said, ‘Don’t quit. Suffer now and live the rest of your life as a champion.” On America “I am America. I am the part you won’t recognise. But get used to me. Black, confident, cocky; my name, not yours; my religion, not yours; my goals, my own; get used to me.”   During second Liston fight, 1965 “Get up sucker and fight. Get up and fight.” On fighting George Foreman (seconds before the start of the “Rumble in the Jungle”, Zaire, 30 October 1974) “You been hearing about how bad I am since you were a little kid with mess in your pants! Tonight, I’m gonna whip you till you cry like a baby.” During Ernie Terrell fight, 1967 (Terrell had refused to recognise his name change) “What’s my name, fool? What’s my name?” On refusing induction into the US armed services in 1967 during the Vietnam war “I ain’t got no quarrel with them Vietcong.” On the impossible “Impossible is just a big word thrown around by small men who find it easier to live in the world they’ve been given than to explore the power they have to change it.” On imagination “The man with no imagination has no wings.” On humility “It’s hard to be humble when you’re as great as I am.” On doing good (in an interview with David Remnick, quoted in “American Hunger”, The New Yorker,  12 October 1998) “Do good deeds. Visit hospitals. Judgment Day coming. Wake up and it’s Judgment Day.” In the pre-fight build-up to the Foreman Fight, 1974 “I’m so fast that last night I turned off the light switch in my hotel room and got into bed before the room was dark.” “Float like a butterfly sting like a bee – his hands can’t hit what his eyes can’t see.” “I done something new for this fight. I wrestled with an alligator. I tussled with a whale. I handcuffed lightning, I got thrown thunder in jail. Only last week I murdered a rock, injured a stone, hospitalised a brick. I’m so mean I make medicine sick.” 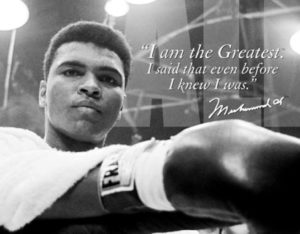 During Foreman fight, 1974 “That all you got, George? That all you got?” On fighting Joe Frazier (to his corner, during the ‘Thrilla in Manila’, 1 October 1975) “This is the closest I’ve ever been to dying”   Before third Joe Frazier fight, 1975 “It will be a killer and a chiller and a thriller when I get the gorilla in Manila.” Poem describing what he would do before the first Sonny Liston fight, 1964 “…now Clay swings with a right, what a beautiful swing And raises the bear straight out of the ring; Liston is rising and the ref wears a frown For he can’t start counting ‘til Liston comes down; Now Liston disappears from view, the crowd is getting frantic But our radar stations have picked him up somewhere over the Atlantic; Who would have thought when they came to the fight That they’d witness the launching of a human satellite? Yes the crowd did not dream when they laid down their money That they would see a total eclipse of the Sonny.”
Tags: BoxingMuhammad Alisports
Previous Post

And the best cook is…Sudhir Ruparelia

And the best cook is...Sudhir Ruparelia