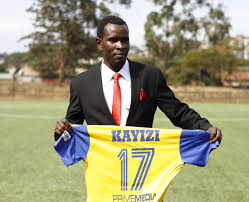 Earlier this week, I saw pictures of Vicent Kayizzi’ unveiling at KCCA FC, and was impressed. Of course it was not the kind of welcome Manchester United offered Zlatan Ibrahimovic in England which came with a helicopter for transport, dozens of reporters, pictures all over social media and all.  In fact to Manchester United, the Kayizzi presser was a joke.

But I loved it for three reasons. One, the club so values its fans, that communication of the new arrival was passed on in real time with a few pictures to confirm it. Two; even with a makeshift press room, the technical area next to the touchline, the club made sure the media was welcomed to a well branded set and a well suited Vincent Kayizzi which is the professional thing to do.

Three and maybe most importantly, Mike Mutebi and his bosses at Lugogo are taking the upcoming campaigns both locally and on the continent very seriously. Of course the mayor’s boys will play CAF Champions League football next season.

Vincent Kayizzi is just another arrival after Brian Majjwega and Goeffrey Serunkuma which undoubtedly massively improves their forward line; a forward line that didn’t look positively predictable last season with Mike Mutebi having to chop and change his attackers and formations.

KCCA is not the first club to unveil players this way in Uganda, so don’t think I find this groundbreaking and worth archiving for the future generations to know there was a first in the month of July 2016. No. The difference is it comes at a time when you feel it’s most needed by the club, its fans and Ugandan football. We must strive to go pro and not just let fans know about their new signing while kicking off the first fixture. The same KCCA FC held a trophy parade the other day driving through various parts of the city showing off their prized asset. This did not only get them a few new fans but also showed how ready this club is to up their standards.

That said, the recent events in Lugogo have sent shock waves to the boardrooms in Nsambya and Wankulukuku forcing both SC Villa and Express, respectively, to come out and get a share of the back pages. In the red corner, for example, there is new management with minister Nakiwala Kiyingi taking charge. You always felt among the VEK (Vilaa, Express, KCCA), it was Express lagging behind. They might have finished three points ahead of Villa in third but truth be told, they have been punching way below their weight.

With all three giants known to have a cult following, Express has decided to awaken theirs by bringing in top musician Bobi Wine as an ambassador which should work wonders. He identifies with the fanatics. After the news, I tweeted expressing my reservation on maintaining Wasswa Bbosa as coach but the Sam Ssimbwa rumours reflect the ambitions the Red Eagles could have.

In the blue corner, Eng. Ben Misagga is quickly gaining the reputation as a no nonsense boss. He chops and changes managers more than Kizza Besigye has appeared in Ugandan courts of law. Which could mean the rich-man is making sure he gets the very best for the Joogos. It also could mean he is not sure what is best for them, though.

The reason for this piece is to awaken those sleeping fans who thought the VEK rivalry was dead. It could get even better next season, making for a mouthwatering campaign. Bring on the 2016/17 season.