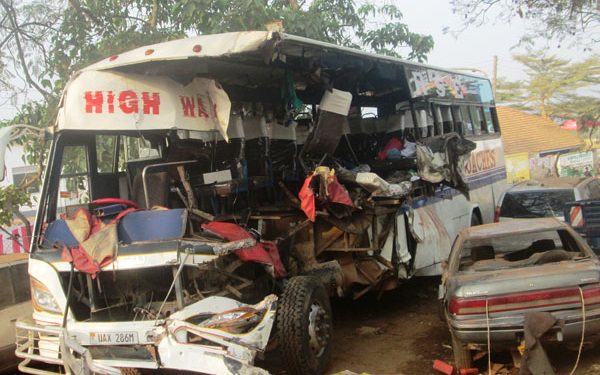 Nine people have been confirmed dead and 16 others injured in an accident along Kampala-Masaka highway at Kamutuuza village, about 12 km to Masaka town. The accident that occurred on Thursday morning happened when a highway bus Reg. NO. UAX 826M on its way to Kanungu District run into a stationery trailer NO. UAJ 872N as reported by Mr. Maxwell Ogwal the Regional Police Commander for Greater Masaka. 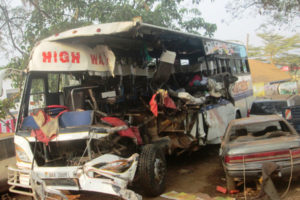 According to the police, some of the deceased are identified as, former Dean of Kinkizi Cathedral, Can Enoch Komunda, Josephine Namilundwa, Atuhairwe Claire and one Mulindwa who is said to be the conductor of the bus. The injured have been taken to Masaka Refferal Hospital and the dead taken to the hospital Mortuary. “We are looking for the driver of the bus to help police with investigations into the cause of the accident because he disappeared shortly after causing the accident,” said Mr. Ogwal. One of the survivors, Justine Najjuma, alleges that the driver of the bus was driving recklessly and he did not realize that the trailer was stationery. “.“The driver was driving recklessly and some passengers had already complained about him but he never listened to them,” Najjuma said. It’s about a week since Prof Lawrence Mukkibi, proprietor of St Lawrence Schools barely survived an accident along this same road. It should be noted that fatal accidents along this road are piling up by the minute. According to Mr. Philip Mukasa, Police Spokesperson for Katonga Region where most of the accidents occur, most of the accidents happen because of indiscipline and reckless drivers who disregard road marks and signs. Police records this year alone show that 96 people have died and 245 injured.
Tags: Kampal-masakaMaxwell OgwalPhillip Mukasa
Previous Post