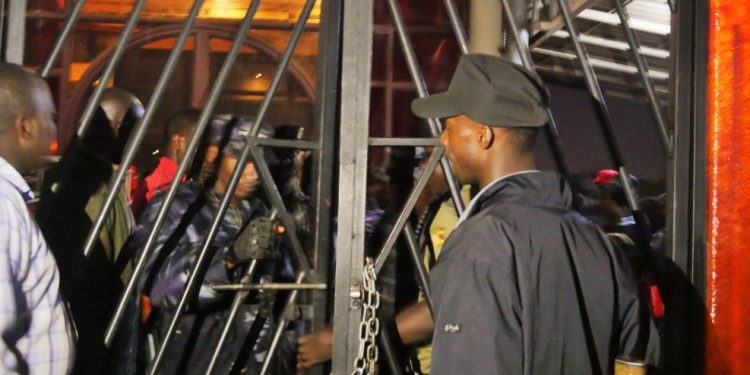 Police on Thursday stopped a gay event that was taking place at Club Venom in Kabalagala. 10 of the organisers were arrested at The Mr and Miss Gay Uganda pageant that was part of a series of activities to mark Uganda Pride Week. Among those arrested were Lesbian Gay Bisexual and Transgender (LGBT) activists Frank Mugisha and Pepe Julian Onziema. Police arrived an hour into the event and closed the doors, barring all entrances and exits to the venue. One of revellers just from the fourth floor of the Tirupati Mazima Mall where Club Venom is located for fear of being identified, probably in a suicide attempt, but he survived and was hospitalised. An hour later, revellers were told to leave but the organisers were taken to Kabalagala Police station and released the following day. Homosexuality is illegal in Uganda and generally frowned upon by the public. Parliament passed the Anti-Homosexuality Act and it was signed into law in 2014, but it was overturned that same year on a technicality. However, homosexual acts are still illegal under the Penal Code and they are punishable by imprisonment.
Tags: Club VenomGayNews LGBTPolice
Previous Post