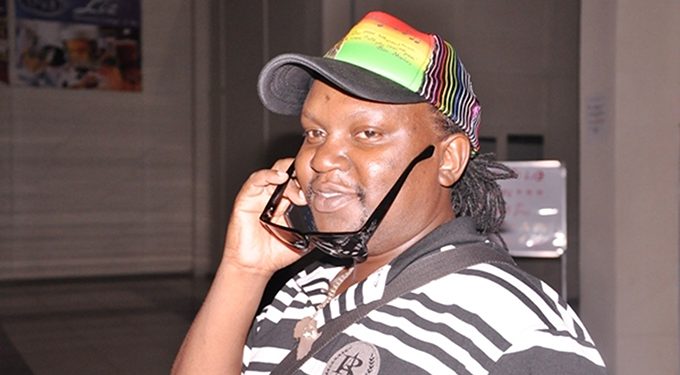 Ragga Dee is a wealthy man and he cannot stoop to the low level of snatching a phone like your average Kifeesi thug, so the story surrounding his case is an interesting one.
The singer is accused by a group of young engineers of stealing the phone that they gave him, but he refused to return it.

The three young engineers under their Zenjiland Tours and Travel company had hoped to cash in on the recent Presidential elections and they developed a yellow phone aptly named M7, after President Yoweri Museveni. It also carried an NRM party logo. The default ringtone had been set to President Museveni’s Another Rap song. The prototype of the phone that they say is in Ragga Dee’s possession cost them $10,000 (about Shs33m) to make in China.

Trying to reach the president
The three young engineers; Robert Mukiibi Mutyaba, Edgar Mwongere and Raymond Mwongere together with a lawyer partnerDeogratiusTumwesigye had grand plans, to actually make a factory that could manufacture such cheap phones here in Kampala. They needed about Shs2.5billion and they knew only a meeting with President Museveni could see their dream come to fruition because they had no source of accessing such funds.

“We met everyone from NRM SecretaryGeneral, the Deputy Secretary General to Brigadier Nalweyiso. They all told us the innovation was good, but that is all they could say,” lawyer Tumwesigye says.

Their search for anyone in the corridors of power landed them on a one Barigye, a Personal Assistant to President Museveni’s brother Gen. Salim Saleh, the man in charge of Wealth Creation. Barigye was full of praise for their innovation and said he could link them to someone who could take them to Saleh.

“If they can fund the Kayola bus, why not this? There is enough market for such kind of phones in East Africa. If you can meet Saleh, you will as good as have met the president,” Barigye told them.

Enter Ragga Dee
It turns out the man Barigye told them to meet to take them to Saleh was musician Ragga Dee and the meeting was at Saleh’s offices at Serene Suites in Mutundwe.

“When we met Ragga Dee he became excited and anxious … he told us that Saleh was actually in office,” Tumwesigye narrates.

They gave Ragga Dee the phone along with project proposals and other relevant documents.
“Ragga Dee entered and came out of office after 10 minutes. He told us ‘Mzee Saleh has seen the phone and he can’t fail to support this project. If it involves using his personal funds he will support you,” Ragga Dee promised.

“We called Ragga Dee the next day and he said man ‘the man is busy, but he can meet next you day.’ We called on the said day and he said he was busy … his morale suddenly went down,” Mutyaba says.

“After three weeks he said ‘muntadeko pressure mulindeko’ (you have put me under a lot of pressure, hold on.”

All this while, a Chinese partner had flown into the country hoping for a meeting with the president and she left the country after the ping pong with Ragga Dee could not bear any fruit.

All we want now is the phone
Three months later, the Presidential campaigns were over and the M7 NRM phone idea was not novel any more. They wanted the prototype to convince other possible partners to come on board.

“We had already made our software and the housing could change to any product say Movit or even Pepsi, but wherever we would go, they would tell us bring the phone,” Mutyaba says.
Unfortunately the phone was in Ragga Dee’s possession, so they called him to give them back the phone and he was reluctant.

“After putting him under a lot of pressure, he called one of our colleagues, Edgar Mwongereto meet him at Forest Mall in Lugogo, so that he would give us back the phone.”
Surprisingly, he gave him another phone, a black phone, which the young man rejected insisting the phone they had given him in the first place was yellow.
“Maybe I will check and see,” Ragga Dee told them.

Their efforts to get back their phone didn’t wane as they needed it to push their project forward.
“He sent us a Whatsapp message telling us that the phone was misplaced, that he was looking for it. He said he can’t find the phone. That the phone has disappeared in Gen. Saleh’s office.”

Going behind their backs?
The makers of the phone now claim that they got wind of a rumour that Ragga Dee had taken a different group of youth to the president, claiming that they had campaigned for him in the mayoral elections and also the president. “He apparently said they are the ones who had made the phone.” Tumwesigye says.

“At that point, we knew anything can happen, so we wrote a complaint letter to Saleh. We met a one Simon at his office and he told us ‘mujiveko eyo sample.’ (give up, that was just a sample.) We told him our interest was in the money that we had lost in coming up with the prototype,” Tumwesigye says.

Legal action
The lads went ahead and opened a case of theft against Ragga Dee at Nateete Police Station under the reference number 47/13/07/2016.
“They summoned him but summoning him became a problem because he would never turn up.

The case was later transferred to Katwe Police Station and we are told Ragga Dee was supposed to appear before the station to give his side of the story so that the case can be forwarded to court, but we are told he is currently in the US,” Tumwesigye says.
They say in case Ragga Dee proves elusive, they plan to forward the matter to the director of Public Prosecution.

“Of course I can’t steal a Kabiriti. I even regret having helped those boys. They brought the phone after campaigns had ended. This was a promotional item and it wasn’t needed anymore because the campaigns had ended,” the singer was quoted.
“The way they are handling the issue, they will never get out of poverty,” Ragga Dee scoffed.

Interview: Navio calls himself a trendsetter as many artistes are now fusing their music with traditional sounds

Interview: Navio calls himself a trendsetter as many artistes are now fusing their music with traditional sounds