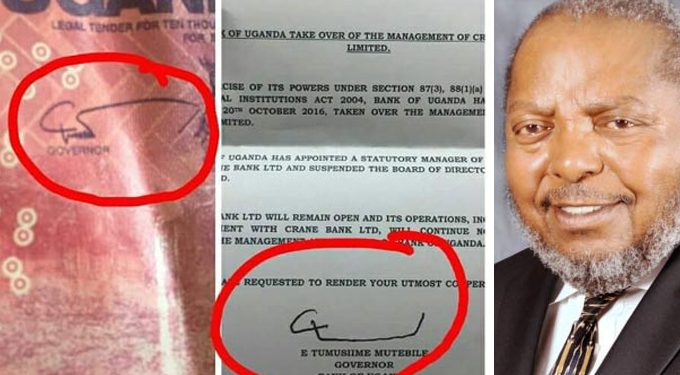 The big news yesterday was the take over of Crane Bank, by Bank of Uganda. But trust Ugandans to find humour even in grave situations. Governor Tumusiime Mutebile’s sign on the document announcing the take over led to a lot of social media banter.

There is a big discripancy between Mutebile’s sign on Uganda’s legal tender and the sign on the document which looks more like the doodling of a child learning to write.


This sign prompted some people to lend credence to the rumours published earlier in the week that the governor is in ill health, though Mutebile met the press and said he was fine as they could see.

BoU’s Communications Director said both signs belong to the governor.

“Some people have observed two different signatures by the governor [Emmanuel Tumusiime Mutebile]. Both are authentic; one for documents and the other specifically for banknotes,” she said.

That however didn’t stop social media users from going on with the #MutebileChallenge, showing that they can do the governor’s job.