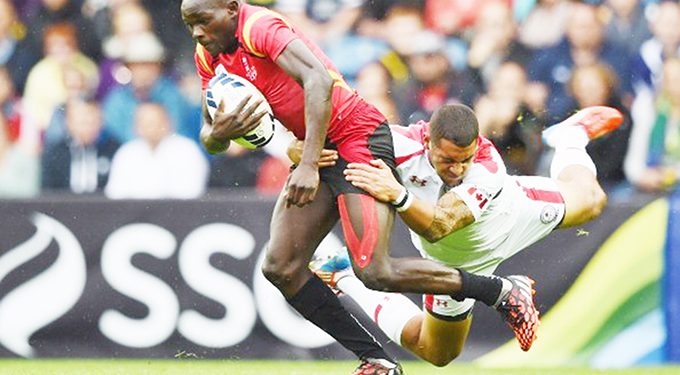 It is said that the reward for good work is more work, and this adage could not hold more true at this time for Uganda’s Rugby Sevens side. The prize for that breathtaking 38-19 rout of Namibia on September 24 at the Safaricom Stadium, Kasarani (Nairobi) is a date with the world’s best sevens sides, at one of the sport’s principal competitions—the Dubai edition of the Rugby Sevens World Series next week.

The World Series draws the cream of the world’s rugby players, and qualification for the event in itself is an enormous achievement. But head coach Tolbert Onyango isn’t thinking of his boys as going to Dubai to make up the numbers. Ahead of the team’s departure next Monday November 28, the mantra has been to show “no fear”.

Uganda is making a maiden appearance at the annual rugby extravaganza, and Onyango has named a competitive 12-man squad to contest in the Series starting in Dubai, before the trip to Cape Town.

The squad is largely unchanged from the one that won the African Rugby Sevens. Only two new players have joined the squad; Michael Wokorach and Byron Oketayot. Eric Kasiita will captain the team while Philip Wokorach will be his assistant. The Dubai Sevens takes place December 1 to 3. After that tournament the team will fly to South Africa to participate in the Cape Town edition of the Series that will be held December 10-11. In Dubai, we will face some of the powerhouses of the game; as Uganda is in Pool B with South Africa, United States and Scotland.

Milkman, a new dairy company launches in a grand affair

Milkman, a new dairy company launches in a grand affair