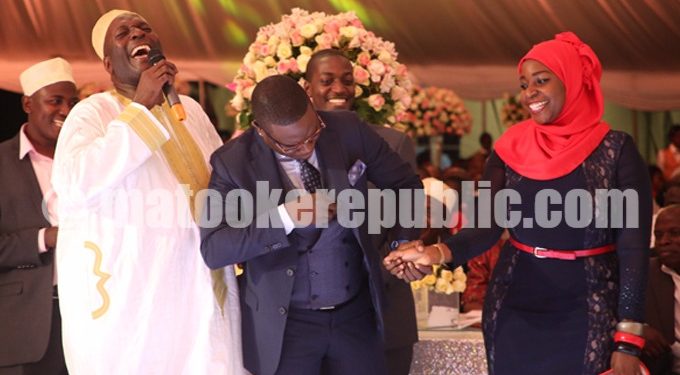 Outspoken Muslim cleric Sheikh Noor Muzata amused guests at tycoon SK Mbuga’s wedding on Saturday, when he introduced his curvy daughter to them, saying he expects her to marry a rich man of Mbuga’s stature. “They say Baganda men don’t sell their daughters, but I expect big things from this one. If you have a happy wallet, come and we talk. I don’t care how you look,” Muzata said sending guests and his own daughter into bouts of laughter. He called on the rich young men at the wedding who are looking for a wife to talk to him. Tycoon Jack Pemba rose from his seat and showered the girl with $100 bills as an Islamic wedding song played. Muzata then told Pemba he had his blessing to take his daughter because he had passed the cash test. “Young lady, you have my number. You can call me any time,” Pemba said. “One piece of advice to ladies. Never get married to a broke nigga,” Pemba said. Muzata is known for his comical speech, so we are not sure if he meant it when he gave his daughter to Pemba. He however wasn’t joking when he told the rich young tycoons at Mbuga’s wedding that he is tired of his Toyota Prado and asked than they buy him a car which won’t look inferior when he parks it next to their sleek rides. He appointed a committee that includes Edson Kasyata, Mbuga’s best man, Mbuga himself, Masaka tycoon Lwasa and Ed Cheune to oversee his car project.  The young men asked Muzata to pick a brand new Toyota Fortuner on Monday morning. Watch the video of muzata handing over his daughter to Pemba below.
Tags: Jack PembaMuzataSK Mbuga wedding
Previous Post

Reggae Vibes Reigns on the Nile

Reggae Vibes Reigns on the Nile