Rwenzururu queen has a message for Ugandans and people of Rwenzori 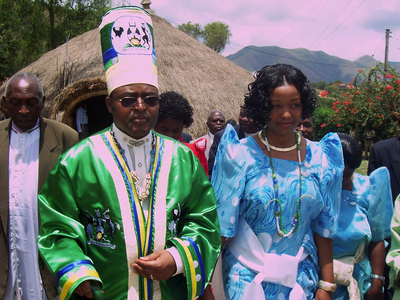 Queen of the troubled  Rwenzururu kingdom, Nyabaghole Agnes Ithungu has a heart warming message for the people of Uganda and particularly the subjects. She revealed that the king Wesley Mumbere is in good health. She also delivered the king’s heartfelt condolences to the kingdom for the lives that were lost on the fateful days of the conflicts.

“The king is in good health though he may need to see a doctor because he is diabetic.  He only complained about the sleeping conditions. The king sends his apology and condolences  to all those who have lost their dear ones during the clashes and has called for an end to violence,” she stated.

In the same line of thought, she called upon the government to restore peace in the kingdom and bring justice to the affected. In a statement released today by Omusinga Charles Mumbere, he blamed government and local politicians for brewing conflicts in the Rwenzori region.

He stated that the government does not respect kingdoms while self seeking, local politicians in the Rwenzori have been dividing people along tribal lines. The government’s official statement, distances the state from brewing conflicts in the Rwenzori. Hon. Jeje Odongo’s statement explains that the Rwenzori conflicts are not a creation of NRM but dates back to the 1900s, and  several attempts have been made to bring peace to the region over the years.

Queen Nyabaghole made the statements after a brief visit to the king yesterday where he is in custody at Nalufenya prison. She was accompanied by kingdom officials and region Members of Parliament ; Atkins Katusabe for Bukonzo West, William Nzoghu for Busongora North, Kasese Municipality MP Centenary Robert and Bukonzo East MP Harold Muhindo . Omusinga Mumbere was arrested together with over 100 guards. According to police, he will face treason charges.

The Club Music Video Awards are back

The Club Music Video Awards are back