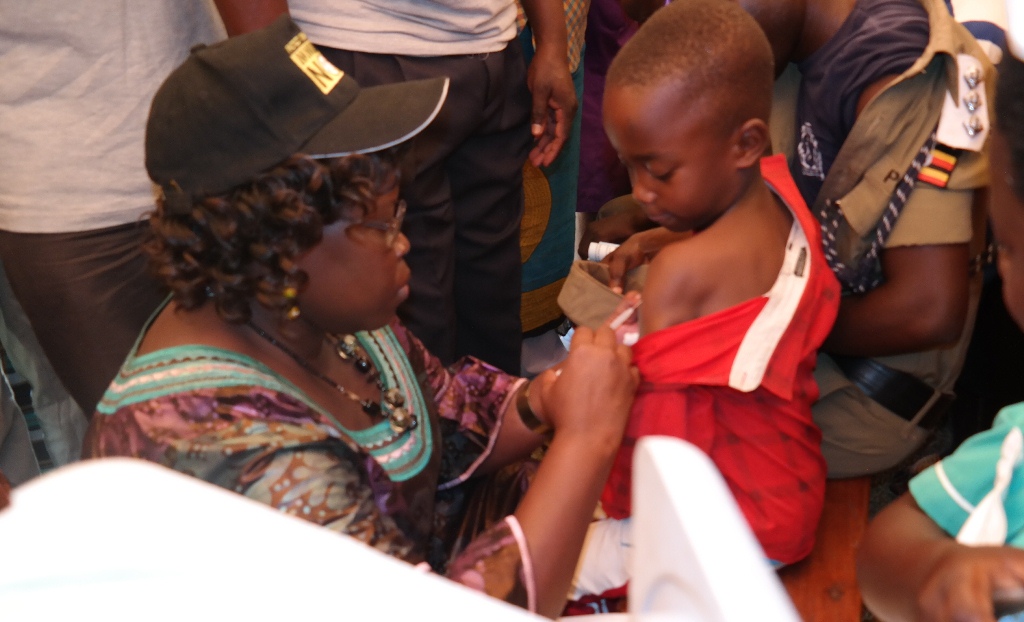 Hon. Dr. Moriku Joyce Odoki, Minister of State Primary Health Care immunizes a child during the launch of a free mass immunization campaign against Meningitis A (MEN A) in Omoro District on 17th January 2016. The campaign that will traverse 39 high risk districts in Uganda has been organized by the Ministry of Health in collaboration with World Health Organisation and partners.

Day one of the free immunization against meningitis (Men A) has received overwhelming response at all the 1,000 pre-selected immunization centers within 39 districts in high risk areas. The high response has mainly been received from children being vaccinated. The immunization exercise which started today, 19th January 2017 will go on till 23rd January 2017 and is mainly targeted at persons aged 1-29 years. Dr. Ocaatre Ronald, Central Supervisor of the free Mass Immunisation campaign in Maracha District located in the West Nile Sub region noted that people had turned up in overwhelming numbers. ‘The first day as expected the turn up is very high. Mothers are bringing their children. Youth are also coming.’ He said. Cassim Ddumba, Social Mobiliser in Gulu, Northern Uganda and Sister Irwasi Okullu Betty, Supervisor in Kaberamaido, Eastern Uganda as well reported that many people have turned up for the immunization campaign. “Overwhelming turn up, it’s more of children,” noted Sister Irwasi Okully Betty, Supervisor Kaberamaido District. Meningitis A is a bacterial infection. According to the World Health Organization; the disease mainly affects young people between ages 1–30, occurring sporadically and in small outbreaks worldwide, except in the African Meningitis Belt where large outbreaks are common. Meningitis cases typically present with stiff neck, high fever, and sensitivity to light, confusion, headaches and vomiting. Even when the disease is diagnosed early and adequate treatment is started, 5% to 10% of patients die, typically within 24 to 48 hours after the onset of symptoms. Left untreated, up to 50% of cases may die. Bacterial meningitis may also result in brain damage, hearing loss or a learning disability in 10% to 20% of survivors. In Uganda, the West Nile is the most susceptible region to Meningitis A along with parts of Bunyoro, Acholi and Lango regions, Teso and Karamoja. Though treatable, the disease can best be prevented through immunisation.  The areas in which this immunisation exercise will be carried out for the next 2 days will be; Arua, Zombo, Koboko, Adjumani, Nebbi, Maracha, Moyo, Yumbe, Gulu, Amuru, Kitgum, Lamwo, Nwoya, Pader, Agago, Omoro, Dokolo, Lira, Alebtong, Kole, Otuke, Amolatar, Apac, Oyam, Hoima, Masindi, Buliisa, Kiryadongo, Amuria, Kaberamaido, Katakwi, Soroti, Abim, Amudat, Kaabong, Kotido, Moroto, Nakapiripiriti, and Napak. All persons and care givers are advised to go to the nearest health centres and other outreach immunisation posts in their districts for the the free vaccine. The vaccine is safe and effective and has been approved by the World Health Organisation. The vaccine will be administered by a trained health worker using a single injection on the upper arm. The campaign has been organised by the Ministry of Health in collaboration with World Health Organisation and other partners.
Tags: HealthMeningitis A
Previous Post