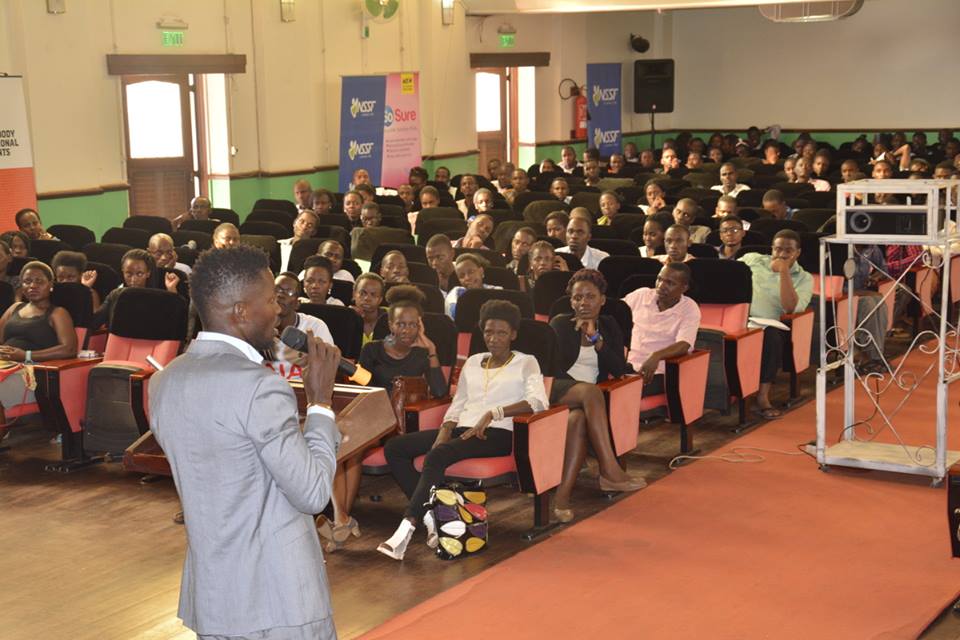 Musician Bobi Wine on Monday delivered a keynote address at Makerere University main hall during the NSSF Career Expo. His rags to riches speech moved students and left them rethinking their career choices.

“After school, I tried to look for work but failed. Growing up, I was taught to adapt, which is what I did.”

“I started out by making wire toy cars and selling them. By the time I was 13, I had my own money from laying bricks and selling pancakes.”

“By 15, I had my own ‘tanulu’ selling bricks and could employ several boys in my community,” he said.

The singer narrated how he questioned education and decided to rely on his talent. After releasing the hit song Akagoma, he has never looked back. But first he had to sell grasshoppers in the ghetto to get the money to record the song.

He asked the students to look out for opportunities around them.

“You all love a ‘rolex’, but don’t want to own a stall, that has to change if you want to succeed. No job is too small, be it selling grasshoppers or pancakes. It is a starting point,” he said.

“There is more money in providing services to common people than in the uptown ones. That is a secret you should all know.”

“From my music earnings, I continued to invest and grow and by the time I left campus, I had over 30 rental rooms in the ghetto.”

“I now have a beach in Busabala sitting on over 30 acres and continue to seek to entertain Ugandans on it.”

“So get a hold of your passion, talent or idea, as long as you work to improve it and stick with it.”

“Everyone has a dilemma, but that is in the mind. Explore yourself and find confidence to remove it.”

“Give yourself challenges before life selects some for you. That will prepare your for life after school,” he said.

The NSSF career expo is meant to help students find their calling, whether getting a job or starting a business. It is being held at all universities countrywide between now and end of April.