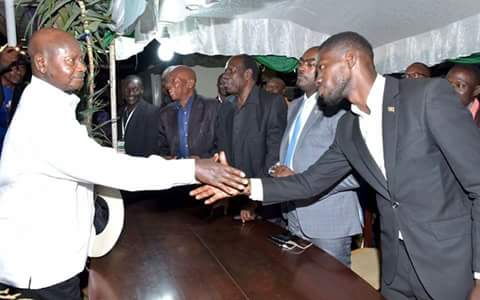 Yesterday evening,  Kyadondo East Member of parliament elect Robert Kyagulanyi alias Bobi Wine met President Yoweri Kaguta Museveni. Bobi diehards have nothing to worry about; they just shook hands at the vigil of late John Sebaana Kizito  in Kampala where the president had gone to pay his last respects.

“Sebaana was a disciplined entrepreneur who advocated for non-frictional politics. He also pioneered education in Luweero in the 1950s. I appreciate him because he was among the few entrepreneurs we have in Uganda. I hear he had a lot of properties and that he died minus bank loans. He was a real businessman.” said Museveni.

“He was a social person who loved everybody regardless of who they were. He was close to my father Amos Kaguta. Once, he came with his wife to Nakasero to see Mzee Kaguta. They bypassed me and when I asked, they said they had known each other while I was in the bush”, added the president.