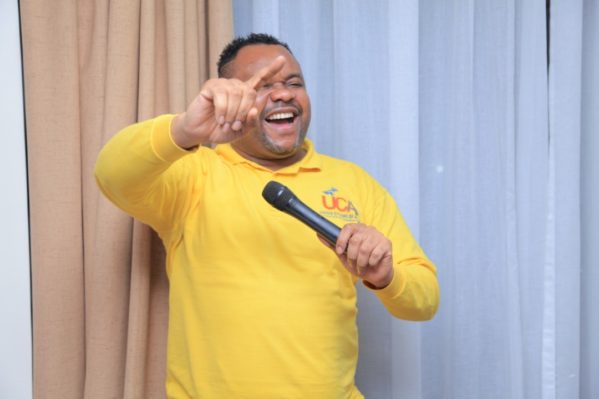 Ugandans have suffered at the hands of pyramid schemes that have sucked their hard-earned moneys with the promise of better returns and later disappeared like a fart in the wind. Gift Circles, Telex Free, D9, ripped off thousands of Ugandans and fled.

With a cloud of doubt hanging over the legitimacy of Development Channel, Matooke Republic’s Investigative Reporter went undercover to unearth the machinations of the company and the motivations of the founder.

On February 27, 2018, the New Vision ran an advert of Development Channel giving free tablet computers to single mothers who had participated in the company’s ‘outreach program.’

This advert was followed another in which Development Channel sought to recruit over 2,500 sales and marketing executives who “did not need to have any education background.”

All one needed to do was to go to the company’s office at Itiri House along Port Bell Road in Kitintale, present his Curriculum Vitae (CV) and get interviewed instantly. Disguised as a job seeker, our investigative journalist set out to Development Channel to ‘get a job.’

Upon boarding a taxi to Luzira from Nakawa Park, a young lady who only identified herself as Jackie randomly asked if the passengers had heard of Development Channel.

The passengers jeered in disinterest – pointing to the fact that they had already heard enough. But being on a mission, the journalist asked out of curiosity what the company was about.

“It is an amazing company that has these amazing tablets. When you buy one, you automatically get a share in the company which guarantees you $100 for a lifetime,” she said.

Intrigued, the journalist asked to see the tablet only to be handed a “Shareholders Certificate” – a document the company gives you after you pay up the Shs860, 000 for the No dropout Tablet.

With Development Channel, you don’t get the tablet instantly. You pay (read order) and wait for when the shipment arrives.

Probed further about the specifications of the tablet, the marketer admitted that it is not about the tablet but the shares and benefits that accrue after one acquired it.

At the Development Channel office

The offices are easy to notice from a distance as the house is decorated with all the flags of the 54 African countries and a big picture of President Yoweri Museveni covering the glass windows.

At the gate, you surrender any form of identification and the security furnishes you a visitor’s tag that you wear around your neck at all times. Development Channel covers all the two floors of Itiri House. Set up in an open office plan, the first place is where the money is made.

Every staff is swamped by about four clients at the time demanding for the tablets they bought.

At the reception, some of the No Dropout tabs are on display with beautiful women manning the counters. As a potential employee, the journalist is ushered into a corner where about 45 other graduates are waiting for the interview.

The wall adjacent to them bears all the logos of the 25 other UK-based companies in which you get a share once you buy the tablet with a tagline 11.11.11 – suggesting that they came into existence on November 11, 2011 – but not according to Company’s House – the United Kingdom’s equivalent of the Uganda Registration Services Bureau.

According to the UK registry, all the 25 companies registered under Charles Nwabuikwu Lambert, the Director of Development Channel Ltd have been compulsorily dissolved. Lambert, the smart man that he is, found a way of re-registering some by tweaking the initials in their names.

The job interview that never was

After minutes of cross-examination, the interviewees were taken to the second floor where the Director or Chairman – as they call him – and top staff sits.

Here, we were ordered to remove our shoes and switch off the phones and were then led to Charles Lambert’s office. Meanwhile, Lambert is sipping on white wine as a skimpily dressed assistant keeps him company. On top of the fridge behind him is a bottle of Robertson Wine and Almeca Tequila.

We took our seats in the neatly set staircase in front of him as if about to stage a performance for him as Lambert scans our face one-by-one. “You have all been given jobs,” he said. “Come back Monday and start work.

Confused, our journalist raises his hand and asks the Chairman what exactly they are expected to do when they report for duty. The answer was an outburst.

“Don’t assume that you know what we are doing here, because you don’t. We are fighting an economic war and we will crush anyone who gets in our way. I will burn your house and f**k, everyone, you know if you get in my way. Here if you get ahead of me, you are fired. “I am from the United Kingdom. Do you think if I was looking for money I would come to Uganda? Are you crazy?” he asked.

Lambert continued to explain how his is a poverty alleviation company that is empowering Africans with a lifetime payment. He scoffed at aid companies that gave Africa with one hand and take with another.

“That is the economic war I am talking about. We are at war with governments that keep their people in poverty. At war with corporations that cheat Africans and multinationals that threaten our social order and we will fight to the end.”

Capital Markets Authority (CMA), the Ugandan regulator of Equity and Securities – buying and selling of shares got interested in the business model Development Channel was using to sell shares to Ugandans yet the company was registered as a poverty alleviation program.

Following answered letters to the company, CMA’s team met stiff resistance from Development Channel staff who physically dragged the officials out of the Luzira-based premises.

Development Channel Ltd was incorporated on July 11, 2016, but has since applied for filed accounts as a dormant company and hence is not paying any taxes in the United Kingdom.

“Any fraudster anywhere in the world can open a virtual office and get an office address. This means it is not easy to confirm the exact faces of people operating the office. It is unlikely that a serious global company with headquarters in London could have a virtual office for her operations,” he said.

Matooke Republic contacted Capital Office and they were more than willing to offer us a London address at only £45 (about Shs220,000) for a year. However, we were told that we were not expected at the premises or to direct people there under any circumstances. The address was only for documentation purposes.

Charles Lambert, the 44-year-old Briton of Nigerian origin is the only director of Development Channel and the 25 other companies – all of which are either insolvent or dormant – meaning they don’t make any money.

This means that anyone who buys a tablet with the hope of monthly $100 (Shs385, 000) has to pray that the companies on the certificate become profitable lest no profits to share.

Although Lambert refused to give this newspaper a formal interview, he released a public notice responding to CMA’s red flag against Development Channel explaining that his company does not sell shares but a rather a certificate of profit sharing that “is not securities and cannot be traded.”

“We do not in any way disrespect the authority of CMA neither do we consider ourselves beyond their oversight but are only requesting that the body see that innovation is a key pillar of the private sector and create room for a middle ground,” the public notice read in part.

This begs the question if the company does not sell shares, why do they tell their customers that they do? And if one earns profits from the tablet he/she buys, why does he/she have to recruit other people to the chain?

Computer and phone dealer Jerome Bananuka told Matooke Republic that with its specifications, the Development Channel No Dropout tablet is worth not more than Shs400,000 in China.

“Those specifications for tablets cost between Shs200,000 and Shs400,000, depending on the number you order for,” he said.

Bananuka added that there are many better-quality computer tablets for the price Development Channel is selling their No Dropout tablet on the Ugandan market but since Ugandans want free money, they are falling for the Development Channel tablet that he says is a grand scam.

Renowned businessman Dr Patrick Bitature cautioned his followers on social media not put their money in get-rich-quick schemes such as Development Channel.

“Investors beware. If it sounds too good to, it is certainly a hoax,” he wrote.

“If you buy the tablet and you lose money, you can perhaps take pride in the fact that you still have a tablet to hold onto but you don’t have much recourse on the company and this is where the government needs to come in and protect people from such corporate theft,” he added.

INTERVIEW: I train like a beast in order to be the best – boxer Latif Muwonge

INTERVIEW: I train like a beast in order to be the best - boxer Latif Muwonge