Government has not issued a single coin to gold medalists despite Museveni pledges, athletes now stuck between rock and hard place 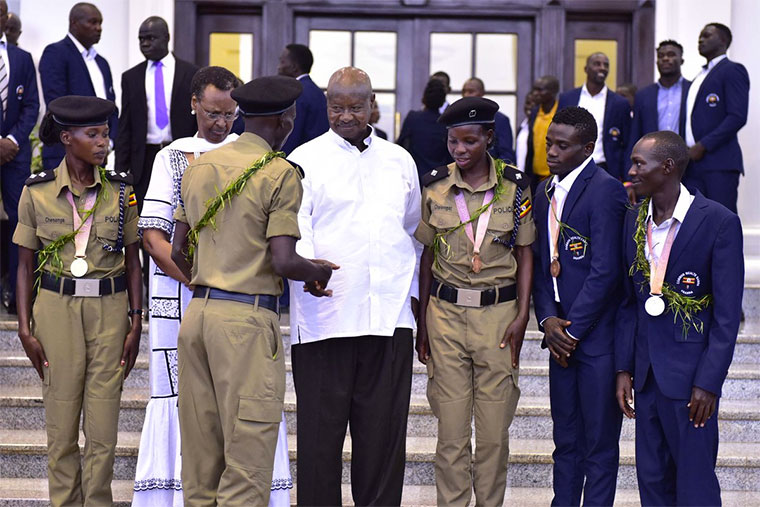 After a massive performance by Ugandan athletes at the Commonwealth Games in Australia in April last year, President Yoweri Museveni pledged to pay all Ugandan athletes who won international medals.

In his words, the president said; “Whoever wins a gold medal at an international or continental competition would get a monthly salary of Shs5m, a silver Shs3m and Shs1m for bronze medal.”

Museveni also promised that the five medalists would get onto their respective payrolls in the Forces (Police and Prisons) adding that he would clear outstanding arrears of promises he had earlier made.

However, it is almost a year now and the athletes are still leaking their fingers, waiting on their ‘handshakes’ to arrive in vain.

“It’s not easy at all,” Joshua Kiprui Cheptegei who won two gold medals in the 5,000m and 10,000m at last year’s Commonwealth Games, told Matooke Republic but declined divulge any further details.

Moses Kipsiro, a 2010 and 2014 gold winner at the Commonwealth Games also revealed that, “as athletes, we are trying to do our best as we wait on the government to honour its promises.”

None of the athletes in the group, he says, has ever received a penny from the government.

Through their representative, Ayeko Simon, the athletes have written a letter to the Speaker of Parliament, Rebecca Kadaga about their plight but have yet to get a formal response.

Since 2012 when President Museveni first pledged monthly salaries for athletes that bring home international medals, little has been done to actualize the promises.

Even Olympics gold medalist, Stephen Kiprotich who declined to comment on this article has been heard in the past, complaining about the promised payments.

KCCA FC, SC Vipers dumped out of CAF Confederation Cup despite putting up a spirited fight