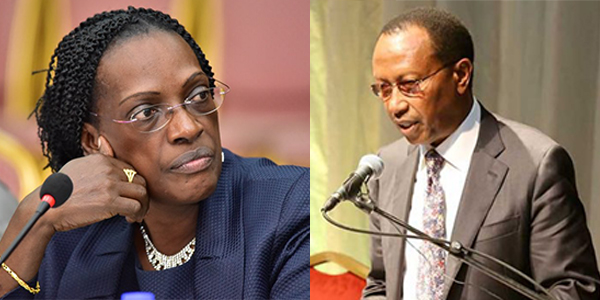 During the hearing, Amos Nzeeyi, one of the shareholders went emotional and said he will never forgive Justine Bagyenda the former BoU Executive Director in charge of commercial bank supervision for what she put him through when she closed NBC in September 2012 citing under capitalisation.

Nzeeyi told the Committee that following a court battle with BoU, the shareholders of NBC Bank were ordered to raise Shs7bn within a week to recapitalize the bank and they complied within four days after he secured a loan from his Kenyan friend and Exim Bank.

Bagyenda is said to have questioned how the NBC shareholders raised the Shs7bn within a short notice, and BoU took over the bank a few months later.

Nzeeyi says he still pays the debt to date even when the recapitalisation didn’t save his bank.

“I have been paying Shs165m monthly up to date. It has changed my life, it has denied my children and grandchildren to go to schools that I wished them to go to. I had hope to go and polish my management skills at Harvard where they had admitted me but I couldn’t go because of this money.”

Nzeeyi said he isn’t sure he is able to forgive Bagyenda because the pain she caused him still haunts him to date.

“For Bagyenda, I know when you repent you can be forgiven before God but I don’t know whether, before some shareholders, the 288 majorities were peasants who sold their goats, their land to invest in the bank. There are some institutions like religion, Catholic and Protestants who had invested in the bank.”

Nzeeyi said that he is now living in fear and can’t step foot in his home district, Kabale where the former shareholders of the bank are baying for his blood after he was accused of receiving money with top shareholders and failing to pay off the peasant shareholders.

In a statement, former NBC Chairman Mathew Rukikaire, said there are several questions that are still unasnwered by BoU regarding the assets of NBC including brand new ATMs worth $240,000, furniture worth $700,000, Seals $150,000 and Vaults valued at $80,000. He added that the former owners aren’t in the know of where the assets are.

“Vehicles of NBC are still parked in front of Bank of Uganda at Kampala road six years after the sale of the bank. NBC cash and assets were far more than depositors and loans as shareholders, we would like to know what Bank of Uganda is doing with our money. We would like the return of our funds,” Rukikaire said.

The NBC owners also accused Bagyenda and Benedict Ssekabira of secretly negotiating the sale of NBC which was still in business with Crane, which was an improper exercise of its mandate under the Financial Institution’s Act 2004.

BoU was also accused of failing to appoint an auditor to lay an inventory of the assets and liabilities up to the take over as required.

They also faulted Bank of Uganda for failing to administer statutory management of NBC for at least six months as required by Section 89(5&6) so as to bring it to prudential standards before taking drastic actions to close the bank.

Quinn Abenakyo and Speaker Rebecca Kadaga on tour of Busoga Region, speaking to the girl-child