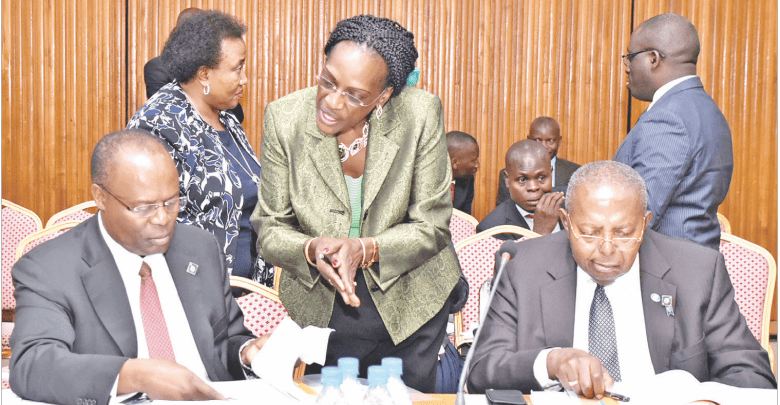 After several days in the Eastern town of Jinja drafting the final report on the investigation into the closure of seven commercial banks by Bank of Uganda, the Committee on Commissions, State Authorities and State Enterprises (COSASE) has finished its assignment. Members of Parliament on the outgoing COSASE have finalized and appended their signatures on the report of the probe that has run since October last year.

And sources inside parliament have revealed to Matooke Republic that the report has outlined harsh recommendations against BoU officials who oversaw the sale of the banks, such as its Governor Emmanuel Tumusiime-Mutebile, his deputy Dr. Louis Kasekende , Ben Sekabira –the Director Financial Markets Development Coordination, and Margaret Kasule –the Legal Counsel.

Unlike it has been in most cases when COSASE members have come up with two differing reports because of divergence of conclusion on a particular investigation, this time there is no minority report to indicate the opinion of the fewer members of the committee as it differs from the major report. The report is unanimous, meaning that all COSASE members have agreed to the recommendations.

The committee has recommended that the officers culpable of wrongly closing commercial banks cease to be employees of BoU, some like Mutebile and Kasekende at the end of their contracts, while others like the legal counsel and the Director Commercial Banks Supervision should just resign.

The MPs also recommend that the Ministry of Finance must start having a strong supervisory role at BoU. It might be remembered that during their interface with Finance minister Matia Kasaija, the MPs were shocked when he told them he has never received any report on the closure of banks by BoU.

The MPs also want MMKAS Advocates to be delisted as one of the service providers of BoU following the firm’s controversial payments of Shs4.2 billion even as its officials also serve as directors of some commercial banks which are regulated by BoU. The MPs spell this out as conflict of interest, saying with such BoU cannot act decisively on such banks in case of a problem.

The MPs have also recommended that BoU workers should not buy any shares in banks through the Staff Retirement Benefits Scheme. They say this also creates conflict of interest like it happened when BoU transferred assets of Crane Bank Limited and Global Trust Bank Uganda to Dfcu Bank where the central bank’s staff have 0.59 per cent of the shares in Dfcu Bank.

And the MPs also recommend that BoU compensate former shareholders of the banks that the were closed. The Shareholders who appeared before the MPs during the inquiry asked for compensations that will see BoU pay in trillions of shillings.

The MPs also want BoU officials to cough about Shs270 billion injected in Crane Bank Limited (CBL but cannot not be traced as BoU officials failed to account for the money that was part of Shs478 billion said to have been put in CBL as liquidity support and other costs during the receivership between October 20, 2016 and January 25, 2017.

﻿Bobi Wine: Opposition must get one candidate so 2021 election is Museveni Vs Uganda; it’s only way we can kick out the ‘Bushmen’

﻿Bobi Wine: Opposition must get one candidate so 2021 election is Museveni Vs Uganda; it's only way we can kick out the ‘Bushmen’