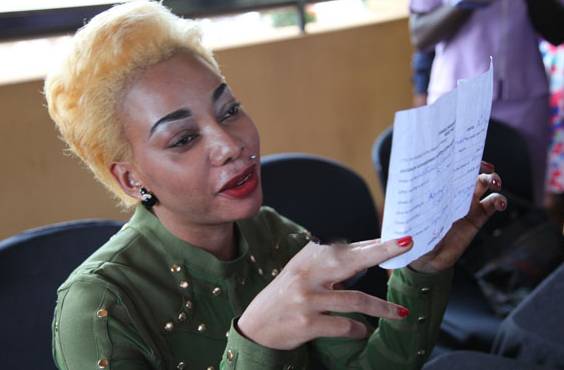 Controversial socialite Bad Black (Shanita Namuyimbwa) is set to start facing ‘The Law’ for her video that she published on social media site Facebook ‘insulting’ President Museveni last year. This is after the socialite was on Tuesday issued with summons to CID Headquarters, Kibuli, next week to answer charges of ‘offensive communication’ and ‘criminal libel’ as the two are respectively spelt out in the Computer Misuse Act and the Penal Code Act.

The summons by the Deputy Director of CID, Joseph Obwona, order Bad Black to appear at the headquarters of Police’s investigative unit without fail next week on Wednesday, 27th, 2019.

“We are investigating a case of offensive communication and criminal libel. You are therefore, in pursuance of the Provisions of Section 27A of the Police Act (as amended), required to report before the Acting Commissioner of Police (in charge of Media Department)….at CID Headquarters… on Wednesday 27th, 2019… without fail” the summons reads in part.

It might be remembered that in late August last year –after Bobi Wine (Hon. Kyagulanyi Ssentamu), Francis Zaake, Kasiano Wadri and 33 other people were arrested in Arua following outbreak of violence on the eve of the Arua Municipality by-election last year– Bad Black released on Facebook a video recording of herself saying some ‘tough’ words about President Museveni and how he has ruled Uganda over the years. The socialite later pulled down the video and apologized.

Bad Black is going to be the third person (all women) facing criminal charges for ‘insulting the president’ –after former Makerere researcher Stella Nyanzi who is still incarcerated as the hearing of her case continues, as well as one Susan Namata who was charged with using social media to threaten to hit the president with her genitals.