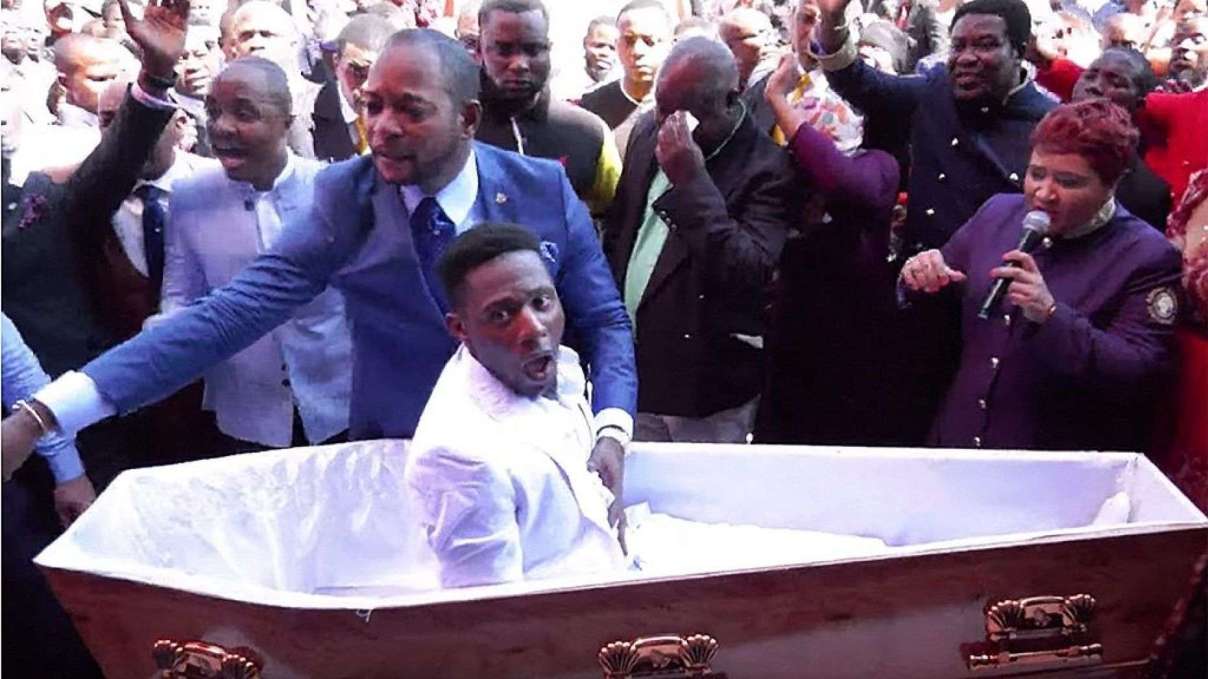 In a dramatic twist to South Africa’s ‘resurrection’ miracle, doggy Pastor Alph Lukau of Alleluia Ministries church has admitted he lied to the public, saying the alleged dead person arrived at church when he was already alive.

Amid mounting pressure, Lukau sent his church leaders to admit he lied, coating with a saying that the man identified as Elliot in the video had arrived alive and kicking inside a coffin at the church gate.

This has promoted the South African government’s religious watchdog institution, CRL Rights Commission, to accuse Lukau of misleading the public.

The Commission—which is renowned for its strictness with religious compliance—has since launched an investigation into the matter.

During a Sunday service at his church in Sandton ten days ago, South Africa, Congolese born Lukau claimed he had brought a dead man back to life in front of a crowd of people near Johannesburg.

Footage of the event showed the man lying still in the coffin before sitting up again when the pastor puts his hands on him.

However, things turned haywire for him on the following Monday when three funeral parlours—Kings & Queens, Black Phoenix and Kingdom Blue—said they had opened criminal charges against Lukau for allegedly being tricked by his church’s representatives to utilize the parlours’ assets to carry out the “plot or scheme”.

“It is with regret that the outcome of such a plot/scheme has adversely affected our reputation as service providers, our valued clients and the general public,” the parlours said in a statement.

Kings & Queens wrote on their Facebook page: “As a Funeral Services Provider we do not offer services without documentation, neither do we repatriate bodies without any paperwork. We are in the process of taking legal action for this malicious damage to our image.”

Meanwhile, after viewing the video footage, which has gone viral, experts have dismissed the “miracle” as an attempt to commercialise religion.

They said a corpse needed to be embalmed and the blood squeezed out to avoid the spreading of germs during transportation out of the country, with the paperwork necessary for this taking about three or four days.

This was the view of Johan Rousseau, chairperson of the 30-year-old Funeral Industry Reformed Association (Fira), which rebuked AMI in what has been dubbed a hoax resurrection.

Chagga: Weasel should tell us who has Radio’s mobile phone, who is leaking the late’s music

Chagga: Weasel should tell us who has Radio's mobile phone, who is leaking the late's music