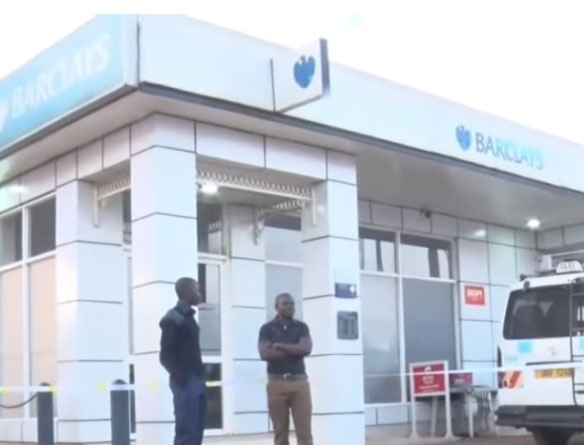 Old Kampala Police station is investigating an attempted robbery by yet-to- be-known people at Barclays bank Nankulabye branch. It is alleged that two security guards at the bank were drugged by thugs who then tried to break into the bank at around 5am Tuesday morning.

Preliminary police findings indicate that the suspects used break-in implements to break one of the bank windows which they planned to use as an entry point into the bank. But the moment the window was broken, the motion detector alarm installed at the bank was sounded sending a signal to the security Guard Africa head office.

Police records indicate that the police 999 emergency response department received a call from security Guard Africa informing them of the break in and inability to get in touch with their guards at the scene. A petrol vehicle registration number UP5496 was dispatched and arrived 10 minutes later and the alarm was turned off.

According to the deputy Kampala Metropolitan Police spokesperson Luke Owoyesigyire the security team of Security Guard Africa and a team of officers from Old Kampala visited the scene to ascertain the facts.

“We have so far arrested one person, a drunkard who was found near the bank at the time the incident occurred. He has been identified as Kenneth Mucunguzi and we want him to help us with the investigations,” Luke Owoyesigyiri said.