President Museveni: Unfair treatment of Ugandans by other regional carriers is one of the reasons why I’m reviving Uganda Airlines 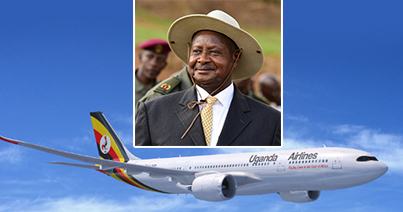 President Museveni has said that one of the reasons that drove him to revive Uganda Airlines is the unfair treatment of Ugandans by other regional airlines, whereby among other forms of segregation Ugandans were paying higher prices than the citizens of the countries that owned the respective airlines.

“Our neighbours were overcharging Ugandans who used their airlines,” Mr. Museveni said.”

The president said it is not right to charge Ugandans higher, comparing it to a market vendor who sells a bunch of Matooke at different prices depending on the buyers’ tribe, for example charging a Muganda higher than a Munyankore.

President Museveni said he actually took long to think of reviving Uganda Airlines because he thought as East Africans we would share with other countries that have Airlines, but the segregation of Ugandans made him realize the country needed its own airlines.

However, the president expressed hope of all regional East African airlines working together, saying he has the belief that “East Africa will form one consolidated airlines

Among other reasons the president gave for reviving the National Airline was to cut down on the expenditure Ugandans spend on travel. Museveni added on that Ugandans spend over shs 400 million on travel every year.

The long awaited first set of the bombardier CRJ 900 registered as  5X- KOB  and 5X – EQU arrived in Uganda today at Entebbe Airport and it is believed that the planes will be flown by Ugandan pilots.

Frank Tumwebaze: Police is mistakenly making Bobi Wine to be seen as a hero