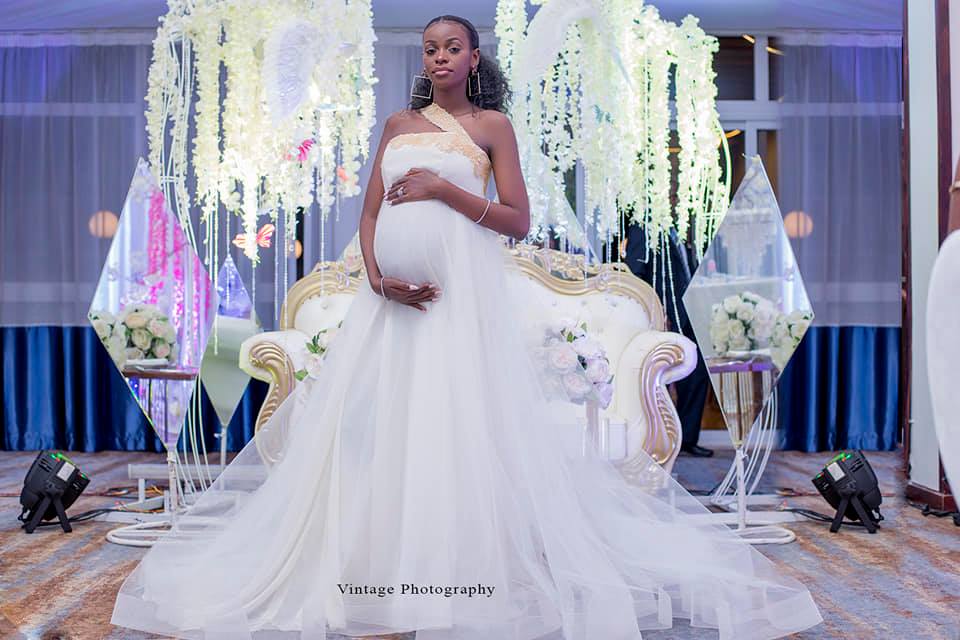 You could say Ugandans are finding more and more excuses to throw parties, as they import all sorts of social events from baby and bridal showers to lit engagement parties. And now a number of them are making ‘Gender Reveal’ parties part of the social scene too, the latest being actress Hellen Lukoma –or you might say the actress’s husband Anwar Kaka (whom Lukoma refers to as Mr. A).

A gender reveal party is a ceremony organized to reveal whether the unborn is male or female. Normally for it to take place, the gender of the baby is kept secret from one or both parents after the antenatal check-up –and it is revealed at the function in the presence of the expectant parents’ friends and family.

It is the kind of thing Hellen Lukoma went through yesterday evening, and the actress was all emotions as she discovered that her husband had teamed up with her sister to surprise her with the do.

According to film actress Eleanor Nabwiso, one of the invited guests at the
lavish all-white event held at Golden Tulip Hotel yester-night, Lukoma walked into the room thinking she had come for a private dinner with her husband, only to be received by loud screams from friends and family.

The excited Lukoma took it to her social media pages to thank her husband and family.

“I can’t explain this feeling, fear, excitement, confusion, faith, hope everything at once. One thing I am sure of, I know good things happen to good people. I am trusting God. It is well with my soul. The best baby gender reveal ever. Thank you Mr A.” she posted.

The couple who exchanged vows early this year revealed amidst loud screams from their friends and family who were all clad in white that they will be having a baby boy.

Thereafter the couple was seen locked in a long embrace dancing to music played by a live band.

Among the guests at the event were friends of Lukoma including city stylist Tina Brad, a heavy Eleanor Nabwiso and her hubby Mathew Nabwiso, to name a few.