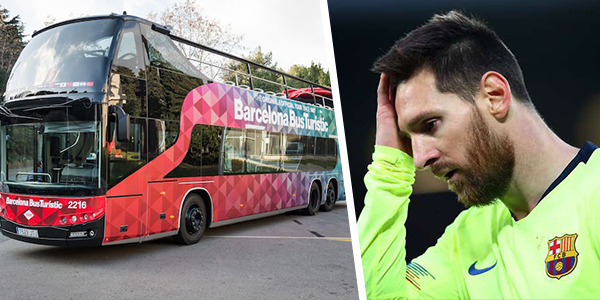 Liverpool yesterday evening completed one of the most remarkable comebacks in history to reach the Champions League final.

While the celebrations will have run long into the night on Merseyside, spare a thought for Lionel Messi.

his was supposed to be the year Messi reclaimed his place at the top of football’s pyramid by winning the treble with Barcelona.

But that dream is over now, with Barcelona fluffing their lines in the Champions League for the second season in a row.

And things got even more miserable for the Argentinian when he was left behind at Anfield by Barcelona’s team bus.

According to Spanish television channel El Chiringuito – and brought to our attention by the Mirror – Messi was held back by anti-doping testers.

Barcelona, in no mood to hang about, left for the airport and their star man made alternative arrangements to join up with his teammates after providing a sample.

Messi declined the media as he walked through the mixed zone after the defeat, his glum face proof of his disappointment.

Liverpool’s 4-0 win against Barcelona ranks alongside the 2005 final against AC Milan for sheer spirited turnarounds.

Many counted them out. And it’s easy to see why given they trailed 3-0.

But Liverpool have a knack for this sort of thing and Jurgen Klopp’s side delivered a truly memorable performance.

Then, in the 79th minute, Origi smashed home from close range following quick thinking from Trent Alexander-Arnold to book Liverpool’s place in the final.

It means another year without a Champions League trophy for Messi and Barcelona.

Not since 2015 have the Blaugrana been European champions, a rather questionable drought considering they have the best player in the world.