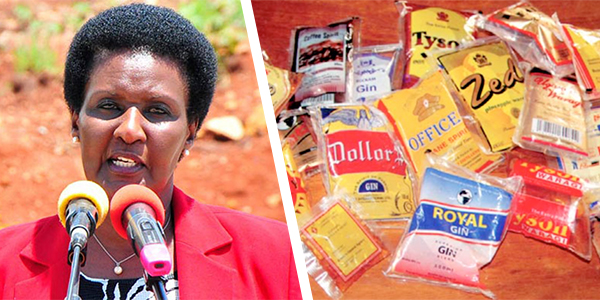 Any trader caught selling or supplying Waragi (local gin) packed in sachets starting next month (June 1, 2019), will have their goods impounded and confiscated, while any distillers caught manufacturing and packaging Waragi in sachets, will have their license/s revoked.

Trade, Industry and Cooperatives minister Hon. Amelia Kyambadde, made the above revelations while speaking at the Office of the Prime Minister auditorium yesterday, as she presented her ministry’s achievements under the 2016-2021 NRM manifesto .

According to the minister, this comes after the expiry of a grace period that government extended to the companies that manufacture and sell sachet Waragi. The companies were given until May 31 2019 as to wipe out all their Sachet Waragi stock and comply with the ban that was pronounced on the manufacture and distribution of sachet spirits last year.

“If by June 1 we find sachets on shelves, licenses will be lost. Even the imported sachets will face the same fate,” Hon. Kyambadde said. She also revealed that they have set up a committee that will be moving around to ensure the full implementation of the ban, revealing that so far, only 15 companies have complied.

The minister says that as government they directed companies to replace the sachet with a 200ml bottle that will be sold at a price above sh2,000, so as to limit easy access to alcohol.

She blamed the sachets for the increased bodaboda accidents and poor teacher performances in schools, noting that people had resorted to taking the spirits while at work.