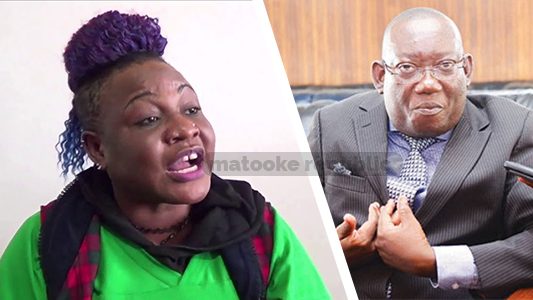 “Full Figure is haunted by an abusive ghost that makes her utter vulgar words anyhow. What is hard for you to say; comes out easy for her. There is no way you can stop Full Figure from using such words because they are like sausage and crisps to her,” Kato Lubwama said during a local television interview.

Full Figure is well known for her vulgar utterances than her music career. Recently her ‘big mouth’ almost landed her into jail as Golden Band singer Catherine Kusasira threatened to drag her to court for tarnishing her brand.

Full Figure had described Kusasira as a shapeless woman who cannot attract any man for a relationship.

Kusasira decided to involve her lawyers to fill a suit against Full Figure demanding a serious punishment.

“I want to be the last person Full Figure insults. I have instructed my lawyers to file a suit and soon she will be summoned,” Kusasira said. Kusasira’s move left Full Figure with no option but rather decided to bend her ego and apologize.