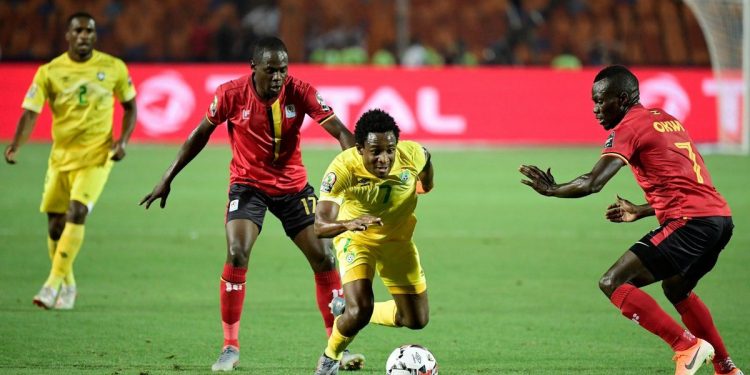 Uganda Cranes has secured a crucial point against Zimbabwe keeping them top of Group A as they wait for the result between Egypt and DR Congo in the final game of the day.

Cranes and Zimbabwe Warriors played out to a one-all draw in a full-blown attacking game. Here are the player ratings for the Uganda Cranes out of 10.

As expected,Onyango led by example despite the constant bombarding by Zimbabwe’s talented attack all through the game. Amongst the many saves he made, Onyango’s superb 73rd minute line clearance save kept Uganda in the game. He was absolutely on top of his game despite Billiat getting the best of him in the dying minutes of the first half.

Mugabi did not look comfortable in the right-back position. He provided a lot of space to Zimbabwean wingers, but he remained positive.

‘Jjaja’ Walusimbi went in most tackles with desperation.  It’s no wonder he lost vision of Khama Billiat, who equalized after a well taken ‘minus’ by Ovidy Karuru.

Mukiibi made a couple of well-timed interceptions in the early stages of the game, but gradually lost pace.

Wasswa looked confident with the ball although the oppressiveness of Zimbabwe’s attack made him lose command of the defense.

Unlike in the first game against DR Congo, Azira looked so ordinary tonight failing to take charge of the midfield battle. He was substituted for Taddeo Lwanga.

Despitethe heated battle in the middle of the pitch, Aucho was totally composed on the ball.

Looked bright at different intervals but his set piece delivery was lacking on many occasions.

Missed Uganda’s best chance in the 74th minute to give Cranes a lead and probably win it off.

Full of dangerous running on and off the ball. He tested the Zimbabwe’s back all time. He created the opening goal and Kaddu’s missed opportunity.

Came in for Azira and he immediately created calmness and relief in Uganda’s midfield.

He replaced Okwi but did not add too much of the desired pace.

He came in too late for Miya so did not do much as well.

In the buildup to this game, he said he wanted a good start and he got it through Emmanuel Okwi’s early opener, but the team generally looked shaky afterwards.