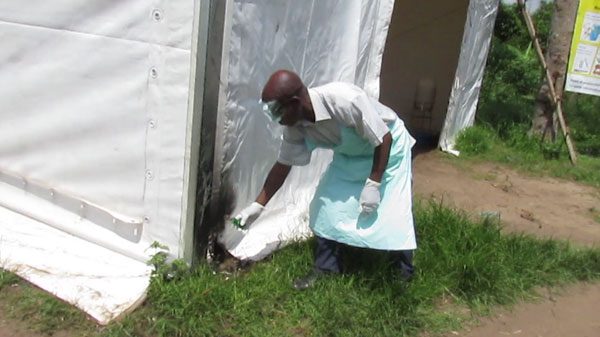 Two of the newly set up Ebola-screening centers at the Uganda-Congo border in Kasese district were on Tuesday night set ablaze allegedly by Democratic Republic of Congo nationals.

The incident occurred at Maliba-Abiri; and Sylvester Baghere, a worker at the center narrated that the unknown Congo nationals caught the security officers off-guard and burnt the facility’s tents. Bahere went on to say that the angry Congolese nationals acted that way because the border medical team has been very strict on implementing the screening measures.

The Kasese deputy Resident District Commissioner, Joshua Kisembo Masereka said the Congolese have been acting angrily when subjected to screening.

“We cannot allow them to just enter yet they might be a threat to our people.” Masereka said as he confirmed that one Congolese national was found with numerous signs and symptoms of the Ebola virus.

Masereka also stated that many of the Congolese nationals claim not be infected with Ebola,arguing that it is witchcraft troubling them.He said police and UPDF have been deployed around the center.

The said screening points were established early last month (June) by Uganda’s Ministry of Health, after the virus was confirmed in the region. Three deaths from the virus have been confirmed so far.

National Gaming Board bosses charged with embezzlement of over Shs1 billion