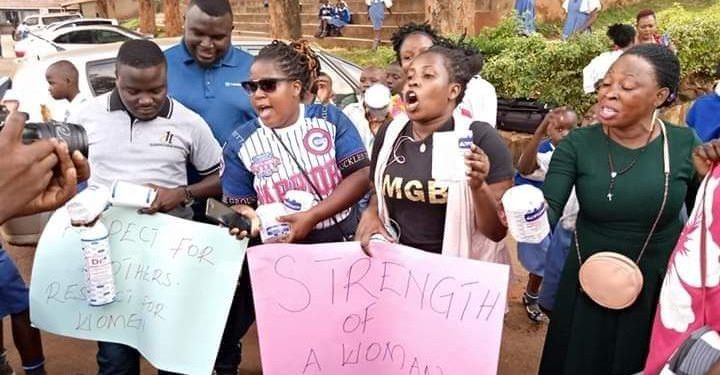 Over nine women have so far been arrested and taken to Wandegeya Police Station. The activists were holding cotton wool, sanitary pads and placards displaying all sorts of messages like ‘Justice for Teddy’, ‘Bugingo should be arrested’, ‘Women deserve respect’, among others.

The protesters had planned to move from Bat Valley Primary School to the office of the Speaker of Parliament to deliver their petition against Pastor Bugingo. Various common faces amongst the protesters included; Bukedde TV presenters Flavia Namulindwa and Fiona Nabitengero popularly known as Fifi Da Queen; and President of the Uganda Musician Association, Sophie Gombya.

They want government to punish Bugingo for his statements and stop him from further spills of his marriage secrets because they portray his lack of respect for women.

Last week, Pastor Bugingo told his congregation of how he endured and spent a lot of money on his wife Teddy Naluswa for 10 years when she had constant bleeding, something that has brought him a lot of backlash, from mostly women.

However, he came out and apologized but a section of women insisted that his apology was not genuine.

I cannot be arrested by this government – Pastor Bugingo speaks out