Police arrests suspect that was caught killing boda-boda rider on camera; his colleague was also beaten to death by a mob after a separate botched robbery 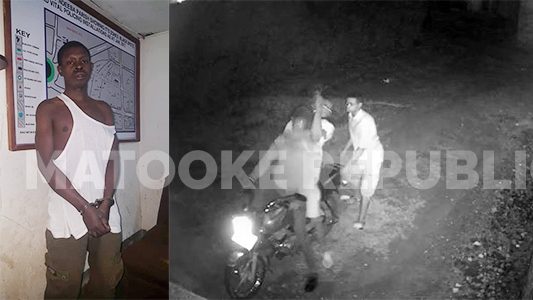 After a fortnight since CCTV footage showing two killers strangling a boda-boda rider, Derrick Mulindwa to death in Kakyeka, Mengo went viral, the Uganda Police has on Wednesday confirmed the arrest of one of the suspects.

The arrested suspect has been identified as Mugisha John Bosco alias Mukiga. According to police, he was arrested last night at Nsiike, Ndeeba, Rubaga Division following a tip-off from concerned residents.

Upon interrogation at Katwe Police Station where he is currently being held, Mugisha reportedly admitted to killing Mulindwa in cold blood.

He further revealed that on July 2, his colleague ( the second suspect in the CCTV footage) only identified as Young Mulo (not the musician) was killed by a mob that trailed them from Mityana where they had stolen another motorcycle.

Police disclosed that Mugisha is a serial robber who has been sent to Luzira Prison multiple times on several robbery cases.

“He will be charged with murder and aggravated robbery,” police said in a statement.