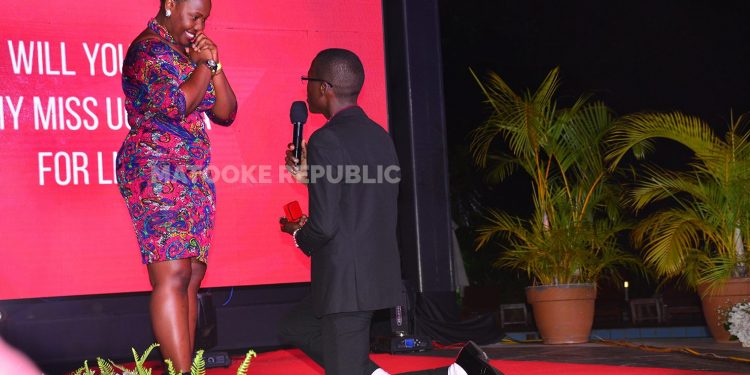 Heard about the “go hard or go home” saying? People are going hard about marriage proposals these days coming up with crazy, romantic, funny and over the top (not to be confused with OTT) ideas.

The Miss Uganda talent show last night at Sheraton Hotel was full of surprises. From the 22 contestants showcasing their talents and hidden skills to the crowd screaming and showing their support to their favourite contestants, the real surprise of the night was a marriage proposal.

A one Lambert Mulangira publicly proposed to his long time sweetheart Margret Namirembe in what was termed as the surprise of the night, and it was done so beautifully.

In a venue filled with a lot of beautiful women, 22 of which are contesting to be crowned the finest in the land, one man closed his eyes, and probably his heart to everyone else and chose one woman, one he asked to marry and spend the rest of his life with.

The beautiful lady was told to close her eyes as the words “Will you be my Miss Uganda for life” were beamed on the big screen on the Miss Uganda stage. Isn’t that just so poetic? The crowd cheered on and on opening her eyes, her boyfriend-now-fiancé was kneeling with a ring and she said yes.

In this day and age where it is becoming harder to hold up a meaningful relationship, it is a big deal to propose or be proposed to after some time of dating. It takes your relationship to the next level from being girlfriend and boyfriend to fiancée and fiancé, confirms your position as the main bae and opens the door to marriage.

Police grill three DFCU officials on cyber fraud, reveal some suspects are outside the country

Here are the five hottest Ugandan songs this week

Here are the five hottest Ugandan songs this week