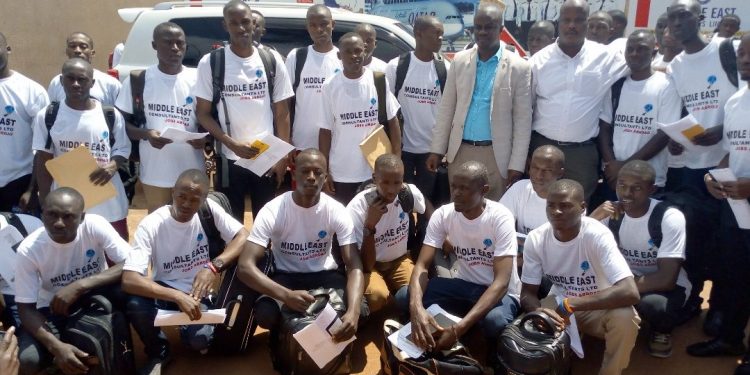 Speaking at the event, MECL Managing Director, Gordon Mugyenyi revealed that over 350 youths got visas to work in a United Arab Emirates government related oil firm and so far 100 have left the country.

“100 have left via Fly Emirates for a 2-year contract to work in oil and gas project as normal helpers. We advise parents to speak to the youths (to be behave well and be purposeful) before they go out for these jobs,” Mugyenyi said.

He told the candidates and parents that two years are not enough for any person to start something developmental at home, advising them to renew their contracts after expiry. He advised them to take the two years as a strategy for development and learning.

“Two years are for planning as you work to renew the contract. The other two years are for development. You can enjoy ‘kyeyo’ money with your family after six to eight years,” he said.

He added that the demand for Ugandans in the Middle East is becoming high day in day out because of discipline and the fluency in the English language.

This comes barely a few days  after the Minister of Gender, Labour and Social Development, Janat Mukwaya revealed that the Government of the United Arab Emirates (UAE) is need of 80,000 Ugandan workers to take up jobs in various categories.

Mugyenyi challenged members of Parliament and other politicians to consult Uganda Association of External Recruitment Agencies (UERA) for appropriate information  in discussing and  drafting guiding laws of labour externalization instead of thinking of closing down the industry because of a few reported cases of torture and exploitation in the media since many of them have been putting up debates but seem to lack information on the procedures and how the whole industry of labour externalisation is being run in Uganda.

“Closing up labour export companies is not a solution; just draft good laws that protect Ugandan workers abroad and be strict on human trafficking,” he said.

He cautioned candidates against reaching their place of work and indulge in social media people power politics attacking government instead because they have got access to free internet in abundance instead of concentrating on their work and save money to come back and invest it wisely.

“I have previously seen some youths using the opportunity to be in UAE for work to use the freely available internet access to attack the President and fight government which is unfair and being ungrateful because you are gaining access to these lucrative job opportunities because of his liberal policies. You are free to support your Bobi Wine but how sure are you that once he becomes President, this policy won’t be reversed? In case that were to happen, all of you would find yourselves being forced back home which won’t be good for you and your families which have a lot of hopes in you,” Mugyenyi said on Sunday mid-morning as part of his send-off address to 100 youths moments before flying them out to Dubai.

Mugyenyi said he personally hates politics but this was being ungrateful to the NRM government whose policy has permitted firms like his to freely connect hundreds of thousands of jobless youngsters to job opportunities in the Middle Eastern countries.

Mugyenyi delivered a comprehensive lecture focused at equipping the 100 youths (part of the 216 group; some travelling later) with life skills they will need to gainfully survive and operate in UAE where all of them are to be working for a government entity. They each have a contract of 2 years renewable and Mugyenyi advised each one of them to aim at working in UAE for 8 years so that by the time they stop working there and return home for good, they have each satisfied all their needs.