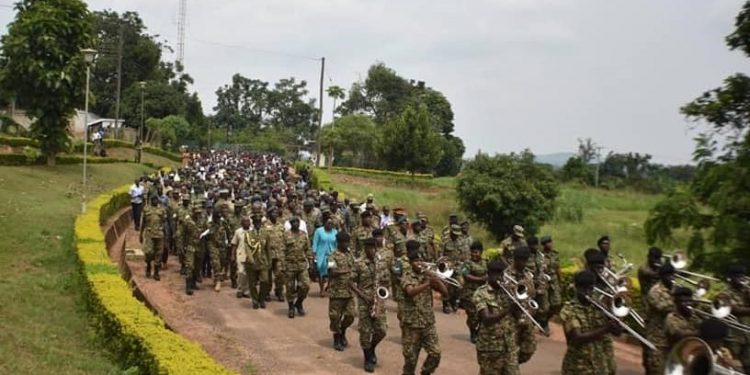 Over 756 army officers of the Uganda People’s Defence Forces (UPDF) have been retired from active military service. These retirees have received their retirement letters from UPDF divisions in Mbarara, Moroto, Kakiri, Masindi, Gulu, and Nakasongola.

The officers ranging between the ranks of Private and Colonel join the 19 Generals that were retired earlier this week on Monday at an event presided over by President Museveni at State House Entebbe.

At a function held at Bombo Army Headquarters, the Commander of Land Forces Lt Gen Peter Elwelu lauded the outgoing officers for their diligent service to their country that has brought about peace and stability. Elwelu said that even though their active military service has ended, they should keep contributing to Uganda’s development.

“Yes, we now have the peace but that is not all we fought for. We still need to see our people prosper. You should continue exercising your patriotic spirit for the good of our people by enlightening them to take advantage of the peaceful environment we have in order to prosper. There is no better time to champion societal development than when one is retired.” Gen Elwelu said.

Most of the retirees have been in service since joining NRA for the liberation war that saw the current government capture power in 1986.