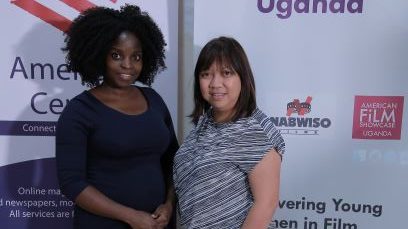 Award winning movie actress Eleanor Nabwiso from Nabwiso films foundation in partnership with the US Embassy in Uganda this week hosted Filipino-American documentary filmmaker Ramona. S. Diaz for a workshop dubbed ‘American Showcase.’ The workshop is an annual US Embassy initiative aimed at capacity building and promoting the exchange of cultures and work.

The Ambassador’s focus as said during Independence celebrations on July 4 is to make sure Ugandan women and girls get big opportunities in many fields including film.

The workshop is a five day workshop at the American Embassy which will wrap with a mini festival at Acacia Mall Century Cinemax on Friday afternoon.

Ramona S. Diaz is an award-winning Filipino-American filmmaker best known for her compelling character-driven documentaries that combine a profound appreciation for cinematic aesthetics and potent storytelling.

Her films have demonstrated her ability to gain intimate access to the people she films – be they rock stars, first ladies, dissidents, teachers or mothers – resulting in keenly observed moments and nuanced narratives. While she has focused on stories of Filipinos and Filipino Americans, the themes of Ramona’s films are universal.

Ramona’s films have screened and won awards at Sundance, the Berlinale, Tribeca, Silverdocs, IDFA, and many other top-tier film festivals. She has received funding from ITVS, CAAM, Sundance, and MacArthur Foundation among others. All of Ramona’s feature-length films have been broadcast on either Point of View (POV) or Independent Lens on Public Broadcasting Service (PBS).

Her latest film, Motherland, won an award at the 2017 Sundance Film Festival and had its international premiere at the Berlinale. It was nominated for an Independent Spirit Awards for Best Documentary. Ramona was awarded a Guggenheim Fellowship and was inducted into the Academy of Motion Picture Arts & Sciences in 2016. She is a current recipient of a Women at Sundance.