I will not stand for Kyadondo MP Seat ever again, I now have a bigger mission to accomplish – Bobi Wine 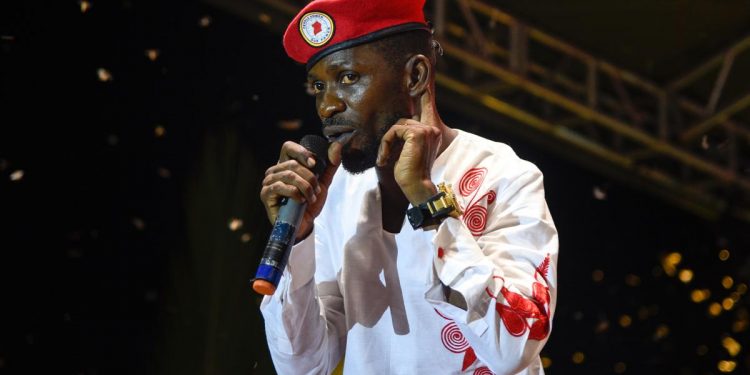 While addressing the crowds that gathered in Lusanja during the service to mark a year since the unfortunate incident in Arua that claimed the life of his driver Yasin Kawuma, Kyadondo East Member of Parliament, Robert Kyagulanyi, also known as Bobi Wine emphasized his mission to oust President Museveni.

“We are on a mission to oust dictator Museveni,” Bobi Wine said amidst cheers from the masses.

Bobi Wine who described himself as a ‘black plantation slave’ fascinated the crowds when he announced not to stand for Kyadondo East Member of Parliament seat gain.

“I will not stand for Kyadondo MP Seat ever again, I now have a bigger mission to accomplish,” Bobi Wine declared.

Bobi Wine said the day (August 13, when Kawuma was shot dead in Arua) should be used as an inspiration to push the regime to the edges.

“This is not politics but reality. Yasin was not standing for any political position but was killed. I am not a slave for any of those in government. I know what I want. Let us know it is not about him but us all in the fight for our freedoms. It is not about religion or tribe but a matter of good and evil,” the legislator said.

It should be remembered that Bobi Wine already declared himself ready to lead the opposition in the struggle to unseat President Museveni in the coming general elections in 2021.

I will not stand for Kyadondo MP Seat ever again, I now have a bigger mission to accomplish – Bobi Wine