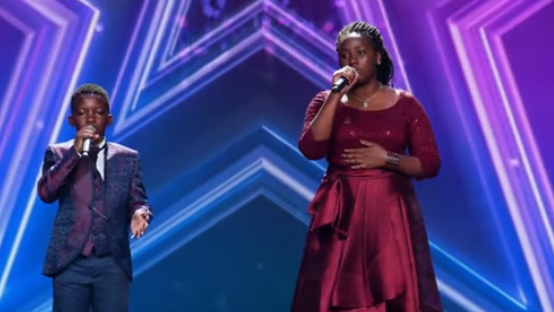 Ezekiel and Esther Mutesasira, children of well know gospel musician Julie Mutesasira are up to compete for the East Africa’s Got Talent grand cash price of $50,000 (Shs184 million).

The incredibly gifted young stars appeared on the EAGT stage to showcase their talents – and yes, they left all the four judges amazed.

Ezekiel (11 years) and Esther (14 years) sang Leonard Cohen’s “Hallelujah” and just a few seconds into their performance, their powerful vocals got the audience on their feet.

Uganda’s Gaetano Kaggwa, challenged both Ezekiel and Esther to sing different songs of their choices a challenge which they both gracefully executed.

“I have goose bumps all over my body!” Uganda’s Gaetano Kaggwa said.

“Those songs you sang take big lungs, and you pulled it off,” Judge Jeff Koinange remarked.

Thrilled Tanzanian singer Vanessa Mdee who is also the judge panel reacted saying; “Something incredible is about to happen [in] your lives, and it is going to start on the East Africa’s Got Talent stage. I cannot wait to witness it.”