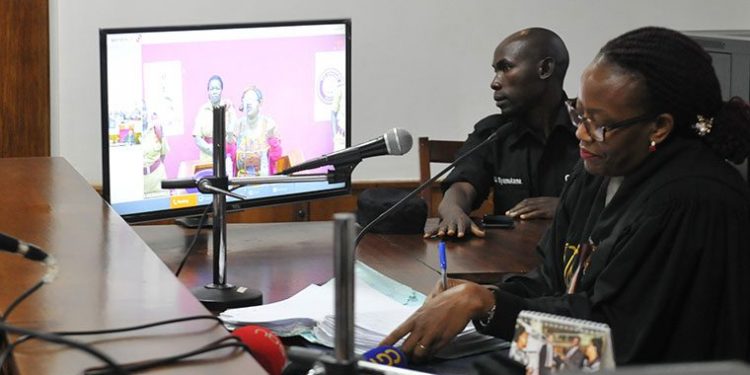 Dr Stella Nyanzi protested the sentence by stripping and exposing her breasts accompanied with flashing the middle finger live on video link to court. Her supporters who had attended court turned violent too, hurling insults to the magistrate and one even managed to throw a plastic water bottle to her.

Police moved in swiftly and arrested up to six suspects for their rowdy behaviour in court. The suspects are; Simon Wanyera, Abdullah Waiswa, Augustine Ojobile, Joel Kabali, Moses Katumba and Fatuma Abenabyo. They were charged with inciting violence and malicious damage to property; and have since been in the coolers.

News reaching our desk is that these suspects have been granted a cash bail of Shs300,000 by Grade One Magistrate Stellah Amabilis.

The suspects denied all the charges in the hearing today, but have been slapped with two new charges; Contempt of court and common assault in which Prosecution contends that on August 2, 2019 within Buganda Road Court premises, the group interrupted judicial proceedings by hurling abuses and throwing a mineral water bottle to her worship Gladys Kamasanyu.

They are required to go back to court for the hearing of the case on September 3 as police continue with their investigations in the matter.