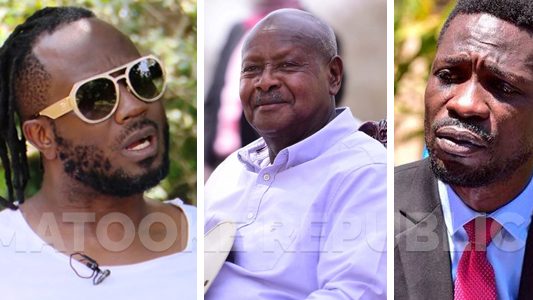 A week after saying that Bobi Wine’s ambition of being President of Uganda is out of range, Silent Majority ‘activist’ Bebe Cool has continued to water down fellow singer’s political determinations.

According to Bebe Cool, Bobi Wine’s decision to join politics would have been a good thing if he adapted to taking his time to learn from the veteran political father figures that are at his disposal.

“Right now I cannot support Bobi Wine when it comes to politics because I see he has no capacity of transforming the country where I want it to be,” Bebe Cool said in an interview with a local Television channel.

He claims that Bobi Wine needs more than 15 years to learn the dynamics of Ugandan politics.

“I find his approach to national issues very wanting. My friend needs over a decade to get himself ready,” he said.

“You should support him as a musician but vote for President Museveni,” he added.

Bebe Cool believes President Museveni should not only be judged on what is going wrong but rather credited for the bright direction he is trying to drive the country to.

“Uganda’s economy is advancing because it’s better than yesterday and the President is finding all possible means to engage the youth through different programs like Operation Wealth Creation,” Bebe said.