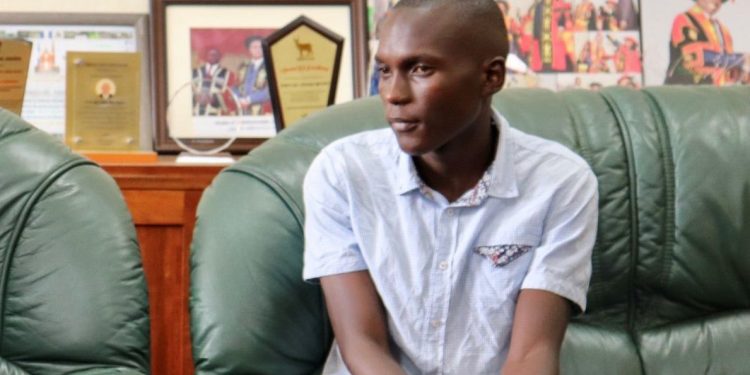 Ever since a photo of Ssuubi Henry Kiyimba carrying a metallic suitcase as he was making his way to University Hall in Makerere University went viral, his story has touched and inspired many, attracting public sympathy in the process.

Earlier this morning, Ssuubi appeared on a local television interview where he talked about his humble beginnings and revealed personal details of who he really is from his primary school in Kamengo to getting a government sponsorship at Makerere University.

As you might have already guessed, Ssuubi’s journey through life has not been all butterflies, roses and rainbows. For the most, it has been the complete opposite.

Ssuubi, the third born in a family of eight owes much of his achievements to his mother who single-handedly struggled to pay for his school fees from the earliest stage to where he is now, because his father was never supportive in any way, spending most of his time drinking alcohol.

“It has always been my mother. Sometimes she would come to school to plead to the Headmaster to let me study on credit, promising to pay school fees as soon as she got the money,” Ssuubi said during the interview.

Ssuubi said that although government decided to offer him a sponsorship at Makerere in a course he didn’t like (B. Sc. Education); he was so happy and grateful because it came as a breather for his mother to channel the money to his siblings. Ssuubi was later offered a full scholarship to study Mechanical Engineering, his preferred course.

Ssuubi also revealed that before joining Makerere, he was not on social media and did not know the workings of Facebook or Twitter.

“Before all this, I was not on social median because I did not know it. I thought Facebook was just a book that had faces,” Ssuubi revealed.

When asked about how he felt when he was shown his viral photo, the freshman said that he did not feel that bad, only that he was shocked by the degrading caption that was attached to it.

“I did not feel bad because I thought people would just see it and move on. I was only shocked by the words that accompanied it. Coming to university with a metallic suitcase doesn’t determine what you will be. We all come here for results,” Ssuubi said.

However, Ssuubi said that he doesn’t hold any bad blood for the person that shared the photo, as it has opened a lot of doors for him and has turned out to be a blessing in disguise.