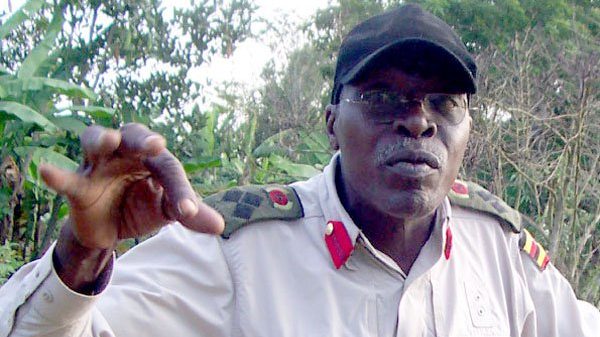 The liberation war ended more than three decades ago but Gen. Kasirye Ggwanga seems to still be very much active in combat shooting things, and the rate at which he is doing it these days is alarming.

Last week, the retired general shot and deflated two tyres of a truck that was carrying logs of eucalyptus trees in Busujju, Mityana district.

In his defence, Gen Kasirye claims that those who planted the commercial forests from which they log these trees first destroyed the natural forests they found in those areas, so he sees them (eucalyptus trees) as a replacement. He swore to use all the resources available to him to stop the cutting of these trees, and the gun is one of those resources.

Prior to this incident, Gen Kasirye shot the tyres of another truck that was carrying logs of eucalyptus trees two weeks ago. This brings the total shooting reports the general has in police books to 11.

When our reporters reached out to UPDF Spokesperson Brig Richard Karemire, he said that it is the police to deal with the matter because Gen Kasirye Ggwanga is now a retired officer and should be tried in civil courts.

Wamala region police spokesperson Norman Ochom asked the public to keep calm because Gen Kasirye Ggwanga’s cases are being investigated and that the files are already in the Director of Public Prosecutions (DPP’s) office for sanctioning.

“We are taking this as a serious matter and we shall soon come to know the motive behind it,” said Ochom.

It should be remembered that Gen Kasirye Ggwanga shot and deflated the tyres of musician Catherine Kusasira’s car in January this year because those in the car were playing loud music and refused to lower the volume when asked to do so.

Eddy Kenzo reacts to Rema’s alleged introduction to another man