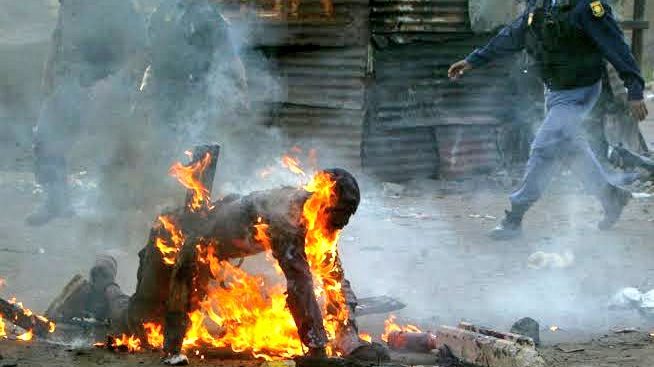 It is quite sad that an African would descend on fellow Africans, beat them to pulp and set them on fire. Africans, how did we get to this? In a world where different organisations and governments are preaching international cooperation by opening borders to immigration and trade, some individuals in South Africa are doing the opposite, and have turned violent on to fellow Africans, an act known as xenophobia.

South Africans forget so quickly. During the darkest time in their history when they experienced apartheid where blacks were oppressed to the bone and segregated against in every aspect of life, the rest of Africa opened their borders for all willing South Africans to immigrate and escape the horrendous effects of apartheid.

Fast forward to 2019, now they seem to have forgotten all that and are now claiming that foreigners in their country are taking all their already scarce resources and the only solution to that, in their opinion, is to kill them and loot or destroy their property. Well, everyone is entitled to their opinion but some opinions are so wrong, and this is one of them.

For starters, people from other African countries in South Africa are not even closest to the group of people that control the South African wealth. They are not decision makers in government or big South African corporations or anything like that. They are people doing common people low paying jobs and running small businesses only trying to feed their families so it is clear South Africans are directing their anger to the wrong group of people.

This morning, a Nigerian man was set ablaze in Johannesburg and left to die as onlookers took photos to share on social media with the hashtag #Xenophobia. What is even more disturbing is that Police is seen doing absolutely nothing to save the man.

Women have been stripped, beaten and humiliated in public. Their property like cars, houses and businesses have been burned to ashes and every foreigner is in hiding trying to save their life.

Amidst all this, South Africa Deputy Minister of Police Bongani Mkongi said, “You won’t find South Africans in other countries dominating a city up to 80%. We cannot surrender South Africa to foreign nationals.”

This is the person that is second in charge in a ministry that is tasked with keeping law and order as well as protecting people’s property adding fuel to an already blazing fire.

These violent attacks on black foreign nationals keep breaking out in South Africa and one wonders whether this is the only way issues disturbing South Africans can be solved. Truthfully speaking, it is not. Killing a person because you think they are eating your food will certainly not put food on your plate.

If South Africa doesn’t want foreigners in their country, let them close their borders and deny them visas. Let them peacefully frustrate those already in the country by hugely taxing them or denying them trading licences. This is wrong in the 21st century but surely, it is better than killing them like cockroaches.

International sports bodies like CAF, FIFA, and IAAF should in return go ahead and ban South Africa from participating in their tournaments since they have chosen to close themselves from the world by mistreating foreign nationals. If South Africans want South Africa free from foreigners, let the world also boycott South Africa from all aspects of life until they rethink their actions.

Tweeting and sharing videos and making noise on the internet will not end this. There should be visible strong action by all stakeholders and right thinking members of the world done towards stopping this nonsensical violence, because it is surely becoming a habit.

Xenophobia is not right, and it is not the way to go. There are peaceful, diplomatic and democratic ways to handle South African frustration towards black foreigners.

Bebe Cool on Rema dumping Kenzo: I anticipated it wouldn’t work out but people thought I was fighting Kenzo