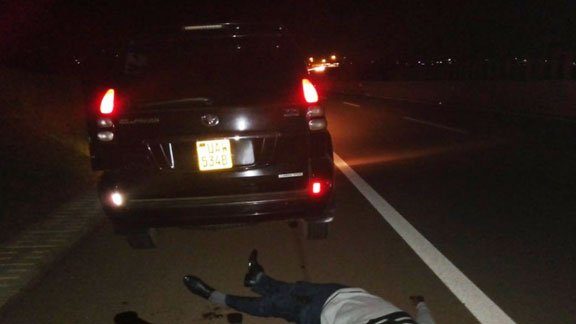 Last night at around 11 pm, Police was alerted of the murder of two people identified as Merinah Tumukunde and Joshua Nteyireho Ruhegyera on Nambigirwa Bridge alongside the Entebbe Express Highway in Katabi town council.

Although some reports say that the two are Rwandan nationals, Police have not yet confirmed whether any of the victims is a Rwandan.

According to Police, the Black Prado TX reg. no.UAW 543B that Maya Kamikaze was found in was well-positioned and parked aside at the time Police arrived on the scene of the crime. The vehicle was facing the direction of Mpala. The lights and engine were still on. The co-driver’s door was still open. It is believed that the crime was committed with the car in this position.

One of the victims Maya Kamikazi was found in seating position in the backseat of the car on the co-driver’s side. She had a bullet wound in the head while Ruhegyera was lying in a pool of blood with a bullet wound in his head at the rear end of the car.

Entebbe Division Police also confirmed that an AK-47 riffle No.UG POL56-3100699022697 was found on the scene of the crime. The rifle was in the hand of Joshua Nteyireho Ruhegyera who is believed to be a body guard to Kamikazi. Their empty cartridges were recovered at the scene.

The statement also says that a Counter Terrorism Uganda police cap was found in the vehicle in which Kamikazi was found. A piece of paper bearing particulars of No.32693 D/Sgt Mutesi and two mobile phones were also recovered on the scene of the crime.

Police cannot yet tell whether anything was taken from the two but investigations are underway to get to the top of this matter.