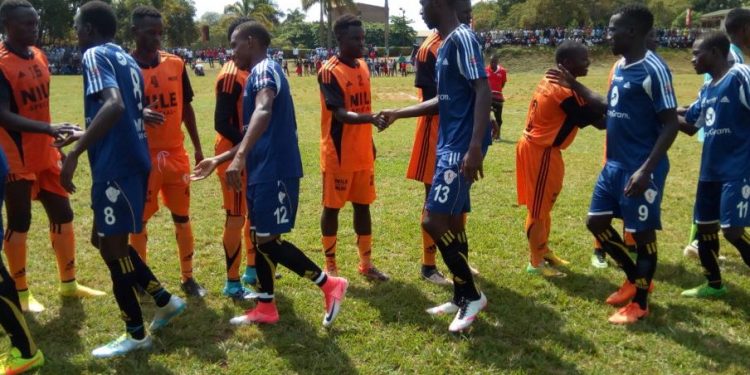 The knockout stage of the Pepsi University Football League got underway on Wednesday with Makerere University Business School (MUBS) hosting Uganda Martyrs University (UMU) for the 1st leg of their quarter-final fixture at the Nakawa grounds.

The two sides settled for a goalless stalemate despite MUBS pressing so hard to ensure an edge in the fixture. UMU now have the advantage in the second leg after securing such a positive result at tough ground away from home.

The fixture was a repeat of the 2017 and 2015 final where each side managed a win. Uganda Martyrs won 2 – 0 to lift the trophy for their first time while MUBS humiliated them 4 – 0 in 2015 to secure a second league title.

Meanwhile, the other quarter final clashes will witness Bugema host the reigning champions Kyambogo University, Busitema takes on Uganda Christian University (UCU) and St. Lawrence University will lock horns with YMCA. Dates for the above fixtures are yet to be confirmed by the organizing committee.

This is the eighth edition of the competition that has only seen MUBS and Kampala University claim the title twice while Makerere University, Kyambogo and Uganda Martyrs University have all emerged winners once.