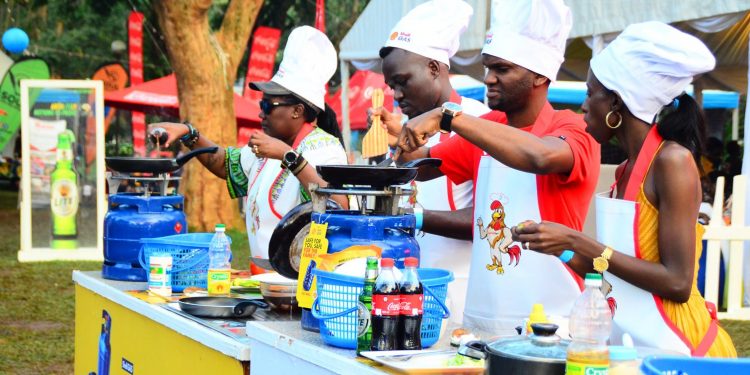 Despite the heavy downpour that threatened the annual Tokosa Food Festival, city dwellers and food lovers did not let that sidetrack their food cravings let alone their fun as many showed up for the action-packed food event.

The aroma from the get-go at Sheraton Gardens was one that awakened hungry stomachs leaving many growling and hungry for the treats that were on display with different delicacies being served at the many food stalls.

Revelers also got the chance to show off their culinary skills with the different cooking competitions that were taking place starting from categories such as Junior Chef, the Single ladies and men, couples and CEOs.

As the event progressed, revelers were treated to a highlight performance by Lilian Mbabazi and the Sundowners who belted out her powerful vocals with songs that were a clear crowd’s favourite like Vitamin as well as a few cover songs from the late Mowzey Radio together with her little girl.

Other performances of the night came from the vibrant Vinka, John Blaq and Winnie Nwagi who left many dancing to their hit tracks.

This year’s edition was sponsored by Shell, Tusker Lite, Ugachic, Coca-cola, Next Radio, and Sheraton Hotel among many others.