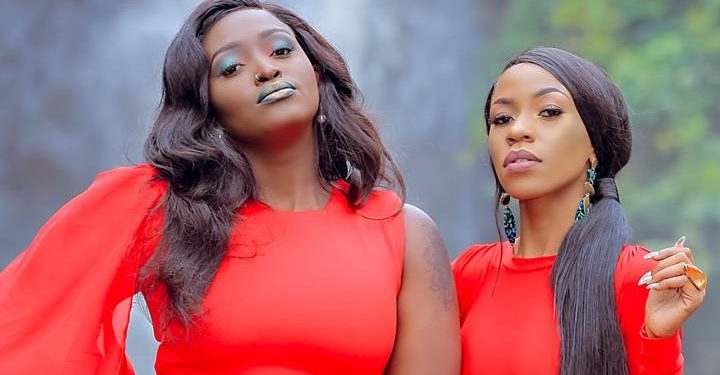 Vinka and Winnie Nwagi, two of the leading acts signed to Muyenga-based Swangz Avenue have teamed up and released a hot new song titled “Amaaso.”

The two songstresses have been on top of their game this year with Vinka releasing a brand new song every month and Winnie Nwagi dropping songs regularly accompanied with steamy videos we have known from her.

In this joint project, Nwagi and Vinka sing about their love for a man they plan to plant their eyes, “Amaaso” on, and go on to spell out every other thing they will do for him like growing old together and scratching each other’s backs.

Swangz Avenue went against their policy of having everything from song-writing to audio and video production done in-house, and decided to outsource for this project. Amaaso was written by Summer Soldier and produced by Crouch from Jeeb records with a clean and fresh video shot on location in the beautiful Ssezibwa Falls by Aaron Mutumba trading as “Aaronaire On Set.”

The video is as clear as they come and we have to say the choice of location is spot on for its beauty. Aerial shots, as it is the trend today, are merged with carefully selected close-ups to complement the beauty of the song. We will have to commend the costume designer and makeup artists of the song for doing exceptionally well too.

Amaaso is pleasing to listen to as both singers backed up each other well interchanging between verses an the chorus, and their voices blended so well you wonder why they had to wait so long to make music together.

This song is among Vinka’s monthly releases, having promised her fans a brand new video-ready song every month, so this is her 9 th song this year.