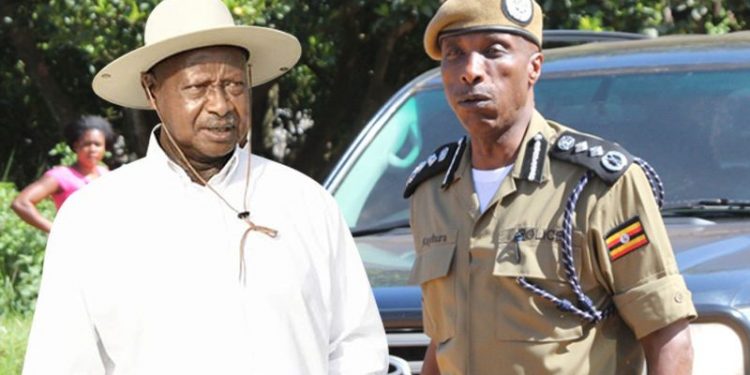 Museveni vows never to hand over Kayihura to the US

Over the weekend, President Museveni gave his insight on USA’s sanctions to his once blue-eyed man, General Kale Kayihura. Museveni questioned opposition’s excitement about the issue before revealing that Uganda is in great position to handle most of her issues especially when it comes to those who are suspected to have made mistakes.

“For Kale or other Ugandans who are suspected to have made mistakes, they will always be handled in Uganda. That is why we shall never handover any Ugandan to, for instance, the Court in The Hague- the ICC. Kale is already facing whatever mistakes he is suspected to have committed in our Courts,” Museveni explained.

Museveni’s only disappointment would be hearing that Kayihura abandoned Uganda to go and make investments in the USA.

Media personality MC Kats was earlier last week sacked by the management of Fame Lounge, a Kololo-based hangout for allegedly his unbecoming behaviour as well as over taking stock on credit and failing to pay.

However, Kats scooped a deal days later from Pearl of Africa Hotel where he will be hosting a similar night he has been holding at Fame Lounge.

Tycoon and former Buganda Kingdom finance minister Rajni Tailor was on Saturday locked up by Police over bounced cheques. Tailor is accused by some members of the Indian community of failing to pay back the accumulated amount of money they lent to him.

It is believed that the money is in hundreds of millions. In an effort to pay the debts, Tailor reportedly issued a number of cheques but they all bounced. The members reported to police who swung into action by locking up the businessman.

This is the second time that the businessman is being held over bounced cheques, having been arrested over similar charges in March this year.

The song accuses the NRM government of perpetrating human rights violations against the people of Uganda in a similar fashion like the past regimes.

However, even before Mayinja’s performance, the concert had already taken on political undertones given Kusasira’s open support for the regime.

While addressing the revellers, President Museveni cautioned musicians against misusing their talent to spread lies. He urged them to use their God-given talent to promote peace in the country.

Investing in the USA when Uganda needs investments? That would be treason- Museveni speaks out on Kayihura US Sanctions