Pastor Kayanja says Pastors and NRM government have a lot in common, that’s why they are willing to support Museveni in 2021 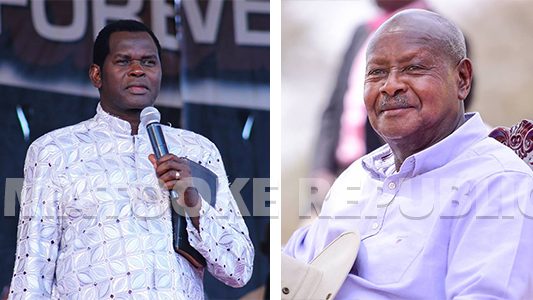 Although religious leaders are always barred from taking sides when it comes to politics, senior Pastor of Miracle Centre Cathedral Robert Kayanja has revealed their pledge as pastors to support President Yoweri Museveni in the upcoming 2021 general elections.

Speaking at Lugogo Cricket Oval where President Museveni was meeting born-again pastors and evangelists, Pastor Kayanja said they are not supporting Museveni because he is the incumbent, they’re rallying behind him because his NRM government has good intentions for all Ugandans.

“We believe that the spirit of God is upon our country. We thank the president for granting us the freedom we needed. Pastors and evangelists have something common with the NRM government; NRM has the correct ideology and we have the correct theology,” Pastor Kayanja said.

“Africa is no longer under the curse. It is time to stand with you (President Museveni) to build our land,” he added.

Nevertheless, Kayanja told Museveni about their stand on opposing Minister Lokodo’s proposals on the born-again churches.

“We have one disturbing issue that is scaring all 55,000 of us; Father Lokodo’s policy document. That document doesn’t represent you at all. We wonder why they only bring it when we’re approaching elections,” Kayanja stated.

One of the clauses in Fr Simon Lokodo’s proposed policy seeks to have all religious clerics including pastors and Muslim imaams to acquire minimum academic qualifications, something the religious leaders are strongly against.