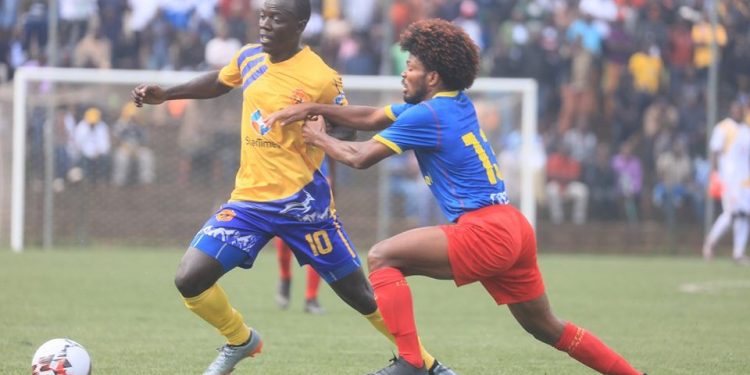 KCCA FC’s CAF Champions League journey has come to an end this evening after they settled for a one-all draw against Angolan side, Petro de Luanda.

Both teams kicked off on a high as they made constant offensive promises. However, the visitors got a ‘fertile’ breakthrough in the 34th minute that forced KCCA’S goalkeeper Charles Lukwago to foul Petro de Luanda’s forward Isaac Mensah in the box and a penalty was awarded.

Ricardo Estevao calmly converted from the spot and gave Petro de Luanda a lead they maintained up to the halftime break.

On return of the second half, Mike Mutebi made a double substitution with teenager Sadat Anaku and new comer Simon Serunkuma replacing Herbert Achai and Nunda Jackson. The Kasasiro boys pushed the visitors back as they continuously pressed to go level.

The constant bombardment yielded results for KCCA since as early as the 57th minute, they got the equalizer through Mustaf Kizza who connected a good ball from Anaku.

Mutebi’s charges demanded for more but the visitors braved on until the fulltime whistle was blown. The one-all result met that Petro de Luanda advanced to the group stages while KCCA descended to the CAF Confederations Cup. KCCA will now be fighting for the Shs1b token if they make it to confederation cup group stages.