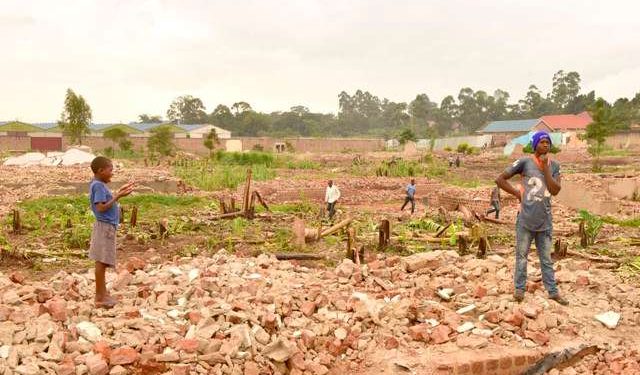 Land wrangles are common in Uganda the way corruption is common in Africa. Late last year, a fierce battle about who the rightful owner of the land in Lusanja along Mpererwe-Kiteezi road broke out where businessman Medard Kiconco used his eviction team to destroy houses and other properties of more than 100 families of the area.

Kiconco’s actions drew in wide coverage from the media and attracted politicians and the general public who majorly sympathized with the residents. The residents dragged Kiconco to court in search of justice and solace, but Kiconco also filed a case where he demanded compensation of over Shs500 million in damages.

The court battle has ended today and unfortunately, it is not the kind of ruling the residents wanted.

Presided over by Justice Tadeo Asiimwe, the High Court ruled that Kiconco is indeed the lawful owner of the disputed land and ordered the residents to vacate the land in 30 days from the day of this ruling.

Court based its ruling on the evidence presented that showed that these residents bought the land from a one Crispa Bitarabeho who had no right to sell, making their titles and agreements null and void.

Court said that what makes Kiconco the rightful owner of the land at Lusanja is that he bought it from the lawful owner Paul Katabazi Bitabareho in 2016.

The outcome of this ruling had now rendered over 300 families homeless, although court has ordered Kiconco to compensate four out of the seventeen people he found on the land in 2016 before he purchased it.