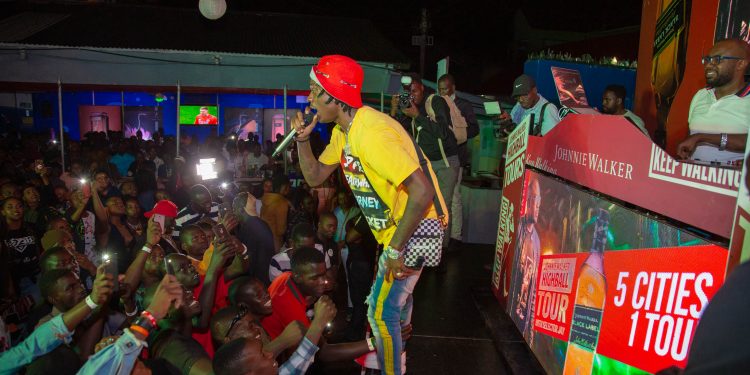 Rapper Fik Fameica was the star of the night after he turned Mbale town wild with an enthralling performance during the inaugural Johnnie Walker Highball Tour that kicked off at Club El Tangia on Saturday night.

Fik who was the headlining act left no tables unturned, throwing an action-packed 40-minute performance that got guests singing and dancing to every beat. He performed songs like “Omu Bwati” his collaboration with Nigerian star Patoranking, “Tonsukuma”, “Tobiloberamu”, “Born to Win”, “Property”, “Byenyeya”, “Tubikole” his collaboration with Vinka and Sconto. But it was “Kutama” that made the crowd go wild for the star.

The “Kutama” star was later joined on stage by Selector Jay who put up an epic show mixing some of Uganda’s hits with an electrifying DJ mix that only masters of the turntable can boast about.

Coupled with impressive décor, the night also saw guests experience the Highball first hand, as they got an opportunity to try out the different cocktails but also make their own Highball cocktails.

Speaking to journalists after the show, UBL’s International Premium Spirits Brand Manager Roger Agamba was ecstatic and proud about how the show had turned out.

“This Highball experience is very intentional, we wanted the people in Mbale to experience the Highball in its full glory and I am more than happy that they have enjoyed it. It has been an amazing evening, let’s keep walking,” he said.

The tour is expected to make five stops in major towns around the country with Gulu coming next on October 26.